Skip navigation!
Story from Body
In news that seems straight out of a Hollywood thriller, scientists have ID'd a form of botulinum toxin — the first new form in over 40 years — that is so dangerous, the details have to be kept secret. The research was published in the Journal of Infectious Diseases earlier this month in deliberately incomplete form, because right now, there are no known antibodies for the toxin. Translation? There is no cure available if the poison were to be used as a biological weapon. That scenario might seem like perfect fodder for a Tom Cruise- or Daniel Craig-led blockbuster, but a Japanese terrorist group attempted an attack using a botulinum toxin in the '90s, so it's not impossible.
While the scientific community seems to unanimously agree that, in this instance, the safest plan of action is to keep the DNA sequence of the bacteria that created the toxin under wraps, the discovery — and subsequent secrecy — raises questions about how researchers should control and distribute information. But what's really scary about this new toxin? It was found in a child's feces — which makes diaper-duty an even more terrifying prospect. (NPR) 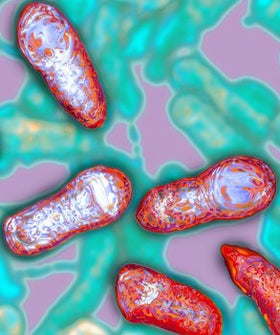 Photo: Via NPR/James Cavallini/Science Source.
Advertisement
Body
Billie Just Launched A Glow-In-The-Dark Razor — Yes, You Read Tha...
We may not have been able to see it coming, but a lot of things have gotten the glow-in-the-dark treatment since those celestial ceiling stickers were in e
by Karina Hoshikawa
Wellness
Truth Told: Why I Chose A Double Mastectomy At 26
When Sarafina found out that she tested positive for the BRCA gene, she knew exactly what she wanted to do. Despite many doctors telling her she was too yo
by Us
Health News
Jillian Michaels Responds To Backlash Over Comments About Lizzo’s...
Jillian Michaels, who rose to fame hosting NBC’s The Biggest Loser, has responded to the controversial comments she made about Lizzo this past Wednes
by Elizabeth Gulino
Wellness
7 Ways To Improve Your Posture
Chances are that right now you’re reading this while slumped over a laptop or your phone. Am I right? Did you just straighten up a little? As you pro
by Elizabeth Gulino
Body
The FDA Expected To Ban Most E-Cigarette Flavors To Curb Use By T...
Vape culture takes another hit as the Trump administration plans to ban most flavored electronic cigarettes in an effort to curb the use of these products
by Alexis Reliford
Clean Slate
Here’s Week 1 Of Your Exclusive Kayla Itsines Workout
by Kayla Itsines
Clean Slate
Kayla Itsines Tells Us Exactly What Your 2020 Workout Routine Sho...
There was a point last summer when trainer Kayla Itsines couldn’t do a single push-up.  For many other people, that would be no big deal. But for It
by Molly Longman
How To Deal With Allergies
What The Color Of Your Mucus Really Means
by Cory Stieg
Wellness
How A Month Without Mirrors Set Me Free
Actor and writer Zosia Mamet has spoken openly about her struggles with an eating disorder and body dysmorphia. Here, she recounts how a month on
by Zosia Mamet
Shopping
The Dental Care Set Your Self-Care Routine Is Missing
quip is a like a breath of fresh air — the gift you can give that will actually impact their wellness routine by improving their daily health habits.
by Emma Banks
Health Trends
Menstrual Cycle Syncing Could Take Your Health To The Next Level
I admit to sometimes blaming things on my period that very well may have nothing to do with my period. You know — Ugh, I feel bloated. Must be PMS. But l
by Elizabeth Gulino
Wellness
Why Is My Birth Control Pill Making Me Sick?
Just last spring, my pharmacy suddenly switched up my birth control brand. After taking the same exact pill every day for five years, I was a little shook
by Elizabeth Gulino
Discover
R29 Stories & News
Watch
R29 Original Series & Films
Shop
R29's Most Wanted