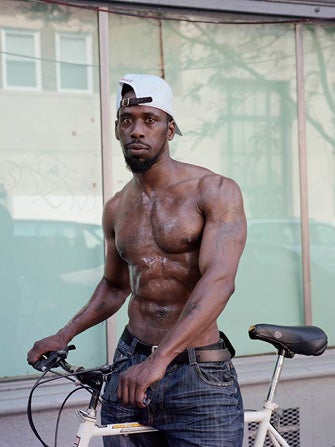 Photo: Hannah Price.
Any woman who has experience in a big city has been subject to catcalling on the street. It doesn't matter what you look like, or if you're just schlepping in sweatpants (and not even the nice ones) — it happens. Sometimes the act can be annoying, sometimes downright offensive, and sometimes, even a little flattering. But, most of the time, it's just uncomfortable.
Photographer Hannah Price decided to turn that awkward, angry feeling into "City of Love" — an art project, and a pretty amazing one, at that. Whenever someone catcalled Price, she turned right around and capture the moment. Sometimes she would approach them and request to take a photo and talk to them a bit; on other occasions she would just photograph them off-the-cuff. The result is a set of photos illustrating very regular, non-menacing people on the streets of Philadelphia.
Advertisement
The art is the result of a powerful action. By being active instead of passive, by confronting these men about their catcalling in a conversational, though not particularly aggressive way, Price forced them to (literally) face the humanity of the person they just so casually objectified. You don't need to be well-read on feminism to have at least an inkling of the issues dredged forth by these interactions. Then, there's the complete lack of editorializing. Price isn't necessarily even judging these men, nor is she painting them in a negative or accusatory light. She, too, is facing her harassers' humanity. (And, exposing the subjects to the vulnerability of a photo is a kind of revenge in and of itself.)
The Morning News had a brief chat with Price about her feelings making these photos, and how she purposefully did not try to detach herself. Click on over to see more, plus additional photos from the series. You can also see more of Price's work here.

Want even more R29? Get the latest news, tips, and can't-resist stories delivered straight to your newsfeed, in real time.
Abortion Access For All
9 Posters To Bring To Your Next Abortion Rights Rally
Update: January 22 is the 50th anniversary of the Supreme Court ruling that legalized abortion nationwide, Roe v Wade. But this year, of course, is differ
by Elizabeth Gulino
Unbothered
Can Black Twitter Ever Really Die?
One of the most tried-and-true elements of Black culture throughout the diaspora, and a staple in American hip-hop culture, is the tradition of sampling: t
by Shamira Ibrahim
Somos Latinx
DACA Might End Soon and I’m Not Ready
The year 2022 marked the 10th anniversary of the Deferred Action for Childhood Arrivals policy, most commonly referred to as DACA. Over the past decade, th
by Jacqueline Delgad...
Advertisement
Unbothered
Brittney Griner Is Free
Ten months. For 10 months, WNBA superstar Brittney Griner has been detained in Russia for carrying vape cartridges with cannabis oil in her luggage. Since
by Kathleen Newman-B...
Unbothered
Meghan Markle Tried To Tell You
We’ve been here before: the royal family at the centre of a “race row” and a Black woman exasperated by it all. Ngozi Fulani, a Black domestic violen
by L'Oréal Blackett
Latinx
We Need More Moms in Politics. But the Election Process Isn’t Bui...
Most of us have ideas of what makes a mama: she’s either pulling up to the school drop-off with a perfect manicure or barely holding it together. As if t
by Jessica Altagraci...
Abortion Access For All
In A Post-Roe World, Here’s What First-Time Voters...
Today is the first federal general Election Day since the Supreme Court voted to overturn Roe v. Wade, the landmark decision that protected a person’
by R29 Team
Somos Latinx
After Getting an Abortion in the US, This Mexican Activist Is Now...
Gente Power is a monthly Somos series profiling the Latine activists, cultural workers, educators, and movement leaders creating change in their communitie
by Elsa Cavazos
Somos Latinx
Dominicans Protested the Violence of Christopher Columbus Celebra...
The UNESCO World Heritage agency describes Santo Domingo not only as the capital of the Dominican Republic, but of the West Indies historically, and romant
by Marjua Estevez
Unbothered
If Your Feelings About The Queen’s Death Are Complicated, That...
On September 8, Her Majesty Queen Elizabeth II passed away at the age of 96, after 70 years as the nation and commonwealth’s monarch. In the days sin
by L'Oréal Blackett
Unbothered
The Most Disrespected Group Online Are Black Women — This CEO Is ...
“The most disrespected person in America is the Black woman…” said civil rights leader Malcolm X, more than 50 years ago. Speaking directly to Black
by L'Oréal Blackett
Abortion
Why Kamala Harris Feels ‘Optimistic’ About The Future...
It wasn’t hard to see the symbolism in the torrential rains that preceded Vice President Kamala Harris’s visit to Indianapolis, IN, on July 25. One mon
by Molly Longman
Advertisement
Advertisement
Discover
R29 Stories & News
Watch
R29 Original Series & Films
Shop
R29's Most Wanted