Skip navigation!
Story from New York
We've all been susceptible to reverse psychology. But who needs those mind games when it comes to our physical health? Now, the latest confusing information we need to overcome are findings from a new study on smoking.

Published in the
Psychological Science
journal, the experiment, conducted by experts from Tel Aviv University, New York University, and INSEAD Business School, reports that tobacco warning labels that read such things as "Smokers Die Early" actually promote cigarette buying instead of deterring it.

The somewhat twisted rationale goes: Consumers feel the cig makers' honesty "increases the message recipient’s sense of knowledge and confidence about the product."
Advertisement
Indeed, when researchers showed 75 study participants anti-smoking ads with harsh health warnings, including increased chances of cancer and disease, and another 75 a cleaner version with less threatening messages, the results were eerily backwards. Immediately after, the viewers of the harsh ads were less likely to buy the product, but days later, they were the ones to buy more cigarettes than the viewers of the clean ads. The journal explains: "As time separates the message from the behavior of which it warns, the prominence of side effects is attenuated, and the trustworthiness of the ad rises."
"Trustworthiness" is a tricky word when it comes to big tobacco though, and the study could definitely use some more rounds of testing. We're just not volunteering for this mind/body game any time soon. (Fast Co Exist) 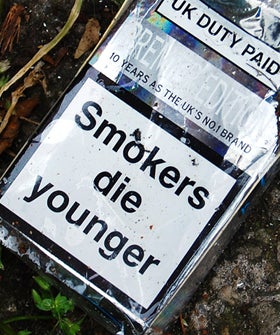 Photo: Via FastCoExist.
Advertisement
Body
9 Reasons You Can’t Get Rid Of That Runny Nose All Winter
by Melissa Kravitz
Wellness
Remedies That’ll Help Heal Your Sore Throat
by Cory Stieg
Wellness
These Are The Stuffy-Nose Remedies That Actually Work
by Cory Stieg
Body
13 CBD Brands To Have On Your Radar
by Karina Hoshikawa
Wellness
Amy Schumer Opens Up About Her IVF Journey & Why She Feels “Lucky”
After sharing her in vitro fertilization (IVF) journey on Instagram, Amy Schumer gave her followers a joyful update. Over the weekend, Schumer thanked fans
by Shannon Carlin
Wellness
You Can Get Pregnant With One Fallopian Tube (Jessica Simpson Pro...
Jessica Simpson gets candid about a lot in her new memoir Open Book, including the sexual abuse she suffered as a child, overcoming an addiction to alcohol
by Leah Carroll
Shopping
I Tried Warby Parker’s Scout Contact Lenses, Here’s M...
I may be going out on a limb here, but I’m just going to say it: I’m pretty sure no one is like, fully obsessed with their contact lens brand.
by Karina Hoshikawa
Body
“I Believed That Tampons Were Impure”: Women On How Cultural Myth...
Women’s bodies, both past and present, are the battleground on which the war of morality is fought. Even with our modern laws and supposedly progress
by Raifa Rafiq
Wellness
The Oscars Face Backlash Again — This Time From New Moms
Did the Oscars just make an enemy of new moms? The ceremony has already faced criticism for its lack of diversity, especially a lack of POC and women nomin
by Alejandra Salazar
Body
Nikki Glaser Apologizes To Taylor Swift For Body-Shaming Comments...
In Netflix’s Miss Americana, Taylor Swift opens up about her struggle with disordered eating and, through a montage, some of the hateful comments she has
by Alexis Reliford
Body
If Your Period Seems Watery, This Might Be Why
Let’s face it: Periods can be weird. At various times they might be clumpy, brown, and, yes, smelly — and usually this is all totally standard. But wh
by Erika W. Smith
Body
Billie Just Launched A Glow-In-The-Dark Razor — Yes, You Read Tha...
We may not have been able to see it coming, but a lot of things have gotten the glow-in-the-dark treatment since those celestial ceiling stickers were in e
by Karina Hoshikawa
Discover
R29 Stories & News
Watch
R29 Original Series & Films
Shop
R29's Most Wanted