Skip navigation!
Story from Chicago
You can hardly go a few blocks without spotting a Divvy bike station, and that's the whole point. Within a few weeks, the bike-sharing system hopes to reach its 300-station goal, which shouldn't be hard considering it's just 14 stations shy. While you may have paused to size up the heavy-duty rides taking over the city, University Village resident Mary Lin told the Chicago Tribune she saw something else: the bikes' rear wheels jutting into her apartment complex's fire lane. When Lin took action to remove them, it started a bit of a domino effect, and now more stations are getting the boot.
Advertisement
Just a few days ago, a bike rack was pulled from the intersection of May and Polk streets after the Tribune inquired about the safety of the location. According to the paper,"It's one of 23 stations the city has moved since the bike rental program took off and the high-tech racks began proliferating in some of Chicago's most densely populated neighborhoods." Despite these hiccups (along with a few other security and safety complaints), Mayor Rahm Emanuel's office "has touted the Divvy program as a success." So much so that the city plans to add another 100 stations in the spring, making the grand total 400 stations.
So, what do you think? Are you digging Divvy? Click here to read the entire article via the Chicago Tribune. 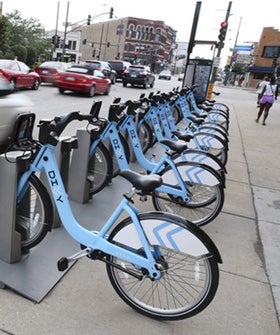 Photo: Via the Chicago Tribune.
Advertisement
Living
This Couple Got Married While Running A Marathon — No, REALLY
What an amazing day!!! #marathonwedding @ChiMarathon pic.twitter.com/rHQ7HxkOfT — Stephanie Reinhart (@kitchy7) October 12, 2015 Like many couples, S
by Ally Hickson
Chicago
J-Lawr & Amy Schumer Boogie Atop A Piano During Billy Joel’...
First Taylor Swift, now Billy Joel. Apparently 2015 is the year that really famous pop stars bring other really famous celebrities onstage with them to per
by Elizabeth Kiefer
Chicago
The Lazy Girl’s Guide To Amazing Skin: Summer Edition
by Melanie Rud Chadwick
Chicago
7 Cool Shops To Visit In Chicago This Weekend
by Christina Perez
Chicago
Found! The Perfect Last-Minute Summer Getaway
by Rebecca Taras
Chicago
7 Chicago Food Experts Reveal Their Fave Summer Eats (& More!)
There’s so much to love about Chicago summers, and tops among them is the food: The bounty of fresh fruits and veggies at farmers’ markets, the
by Judy Sutton Taylor
Chicago
20+ Pics Of Pitchfork’s Most Inspiring Street Style Stars
by Erin Donnelly
Chicago
How To Do Chicago Like A Lollapalooza All-Star
by Leah Pickett
Chicago
11 Chicago Dream Apartments To Rent Right Now
by Stephanie Sims
Chicago
18 Delicious Chicago Dishes For Your Foodie Bucket List
by Caroline Stanley
Chicago
Chicago’s Best Al Fresco Happy-Hour Spots
by Amelia Levin
Chicago
How Two Sisters Are Changing The Way We Namaste
We tend to think the best decisions in life are made over pizza. Case in point: One frigid January night last year at Pequod’s, sisters Natalie and A
by Jourdan Fairchild
Discover
R29 Stories & News
Watch
R29 Original Series & Films
Shop
R29's Most Wanted