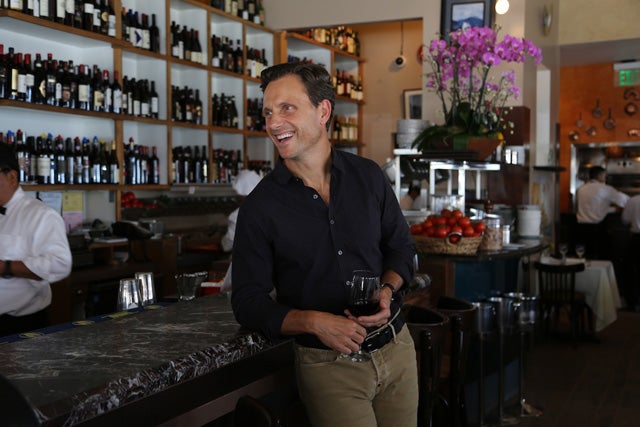 Photo: Courtesy of The New Potato
Life is good for Tony Goldwyn. As President Fitzgerald Grant III, not only does he run the country, but he gets to cozy up with none other than Kerry Washington's Olivia Pope. His character — and his character's character — is a subject of great contention among the show's fan base (and even the cast), but no one can deny that Goldwyn himself is a total charmer. It might be the adorable trait that lends itself to late-in-life success, but we just can't get enough of the actor. And, as it turns out, neither can The New Potato. The intrepid writers behind the food blog caught up with the actor at one of his favorite L.A. eateries, to um, grill him on his daily grubbing and the role of a lifetime.
Advertisement
To kick things off, Goldwyn dished (sorry, we had to!) on his ideal eating day, and it sounds a lot like our own. "First order of business, STRONG black coffee," he told The New Potato. "Ideally French roast, but I’m flexible." He also enjoys creature comforts like a true flaky croissant, fresh oysters, and authentic Italian sandwiches. It sure sounds like we have a lot in common.
He also disclosed how Scandal's success is partly due to the cast's active Twitter presence. "Scandal was truly a grass roots success," he said. "The ratings were respectable to begin with, but we were really discovered on Twitter. Given the exponential impact on Twitter, the fans basically told the mainstream media to pay attention. The press, and frankly the network, were caught by surprise. By the middle of Season Two, the show was on fire."
Outside of the show's breakout success, Goldwyn truly loves taking on the role of President Grant. "The great thing about playing Fitz is the contrast of dark and light in the character," he said. "I’ve played a lot of villains and more than a few upstanding guys, but Fitz is both at once. And he’s the freaking President of the United States!"
Head over to The New Potato for the full interview, and to check out musings from the other cast members as well. And, of course, don't forget about Scandal's season three premiere tonight — if you need us, you can find us glued to our TVs. (The New Potato)
Advertisement
Entertainment News
Prince Harry & Meghan Markle Will Leave Their HRH Titles Behind —...
When Prince Harry and Meghan Markle announced that they would be taking a step back from the royal family, there was a lot of confusion about what, exactly
by Lydia Wang
Pop Culture
Cameron Diaz & Benji Madden Got Creative With More Than Their Bab...
One of the toughest decisions parents must make is what to name their child. What’s in a name? How creative should you get? Should you continue family na
by Tara Edwards
Entertainment News
One Of R. Kelly’s Girlfriends Has Reunited With Her Estrang...
When Surviving R. Kelly first aired on Lifetime, the world was introduced to the harrowing personal stories of women who alleged that the R&B singer ha
by Ineye Komonibo
Entertainment
American Horror Story & The OA Actor Dead At 27
Hollywood has lost another star. Harry Hains, popular for his roles in shows like Ryan Murphy’s award-winning American Horror Story and the beloved sci-f
by Ineye Komonibo
Entertainment News
R. Kelly’s Girlfriends Got In A Fight On Instagram Live & N...
As if the charges he’s currently facing weren’t already gravely serious, R&B singer R. Kelly’s legal situation might be getting even more complic
by Ineye Komonibo
Entertainment News
Silvio Horta, Creator Of Ugly Betty, Found Dead At 45
TV producer and creator of ABC’s Ugly Betty Silvio Horta has died, according to Deadline. Reports around the cause of death vary at this time. Refinery29
by Kaitlin Reilly
Pop Culture
Riverdale‘s Vanessa Morgan Tied The Knot With A Ce...
Vanessa Morgan and MLB star Michael Kopech have tied the knot. Morgan, who plays Toni Topaz on the hit CW show Riverdale, and Kopech, a pitcher for the Chi
by Alejandra Salazar
Entertainment News
Leaving Neverland Accusers Can Sue For Sexual Abuse, After...
As of January 1, 2020, a California law preventing victims of childhood sexual assault from filing a claim against a corporation after the age of 26 has un
by Sarah Midkiff
Movies
Time’s Up Addresses Exploitation In Auditions, Nude Scenes & Work...
Time’s Up has taken a major step to empower workers in the film industry. The organization debuted its three-part guide to working in entertainment to ed
by Sarah Midkiff
Entertainment News
DaBaby Has Been Arrested On Battery Charges
Rapper DaBaby (real name Jonathan Kirk) was taken into police custody and questioned by authorities on New Year’s Eve during a trip to Miami, FL. The
by Ineye Komonibo
Entertainment
Nick Gordon, Ex-Boyfriend Of Bobbi Kristina Brown, Is Dead At 30
The Associated Press reports that Nick Gordon, the ex-partner of Whitney Houston’s late daughter Bobbi Kristina Brown, has died. He was 30.  Gor
by Leah Carroll
Entertainment News
America Ferrera Kicks Off 2020 By Announcing She’s Expecting Her ...
America Fererra is expecting her second child! She rang in 2020 by announcing her pregnancy on Instagram, in a photo surrounded by her husband, Ryan Piers
by Meagan Fredette
Discover
R29 Stories & News
Watch
R29 Original Series & Films
Shop
R29's Most Wanted