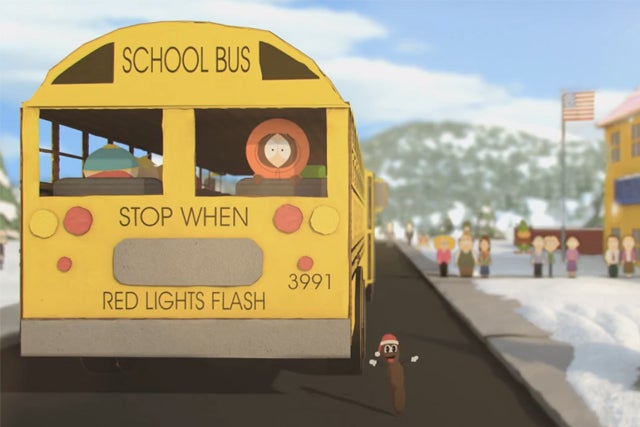 Photo: Courtesy Comedy Central.
South Park is 16 years old. It's old enough to drive. It's old enough to have had several fumbling attempts at sex. It's old enough to remember the days when "molly" was more commonly called "ecstasy." And now, perhaps a bit belatedly, it's growing things in strange places. Mostly, we're talking about its new 3-D opening titles. After all these years, the show has finally ditched its stop-motion, paper-craft style and embraced the depth of field.
Fans on Facebook are split. Some like 'em, some don't. That's to be expected. Check the full sequence out over at DigitalSpy.
Also somewhat belatedly, the season 17 premiere decided to tackle the summer's Edward Snowden scandal. In response to the NSA's far-reaching domestic espionage, Cartman decides to publish every piece of personal information online. Here's a trailer for last night's episode:
(DigitalSpy)
TV Shows
Marie Kondo’s Tidying Ways Go Deeper Than Just Sparking Joy In A ...
In 2019, Marie Kondo’s Netflix series Tidying Up With Marie Kondo gave a global spotlight on how to find happiness through organization at home. It helpe
by Morgan Baila
Unbothered
Just One Episode In, Our Kind Of People Is Our Kind Of TV ...
Although Martha’s Vineyard is predominantly known as the playground for wealthy white people, it’s also home to an exclusive community of some
by Ineye Komonibo
Unbothered
How Are Black Folks Redefining & Reclaiming Luxury? Elaine Welter...
“What does [luxury] really even mean?” asks Chelsea Sanders, co-host of Go Off, Sis, the podcast from Refinery29’s Unbothered. “Des
by Taiia Smart Young
Advertisement
Unbothered
If Your “Diverse” Teen Show Isn’t Giving What Sex Education
Welcome to “What’s Good,” a column where we break down what’s soothing, distracting, or just plain good in the streaming world with a “rooting fo
by Kathleen Newman-B...
Unbothered
Jennifer Hough’s First On-Air Interview About Nicki Minaj &...
*Editor’s note: this story contains discussions about sexual violence, threats, and intimidation. Please read with care.  A month after publicly all
by R29 Unbothered
Entertainment
Mj Rodriguez Takes The Mic For Her Next Act As Michaela Jaé
She made history as the first trans woman to be nominated for a major acting Emmy — but she’s more than just a label. The Afro-Latinx actress, singer,
by Ariana Romero
Entertainment
Bachelor In Paradise Season 7, Episode 9 Recap: Body Tacos...
Going into this episode of Bachelor in Paradise we knew a few things were going to happen: Kendall’s fate on the beach would be decided, new contestants
by Lia Beck
TV Shows
What Happened At The Hotel, Ivan?
On Bachelor in Paradise, the cameras are usually around to capture any drama or sparks between contestants, but due to a tropical storm briefly shuttering
by Martha Sorren
The Bachelor
Everyone Who’s On Bachelor In Paradise This Season —...
by Martha Sorren
Somos Libres
Elisabet Velasquez’s Debut Novel Redefines What It Means fo...
Elisabet Velasquez’s knock-out YA novel-in-verse When We Make It begins with its young protagonist’s rendition of the biblical story of Abram and Sarai
by Claire Jiménez
Unbothered
So…Are We Ready To Emotionally Divest From These Hollywood ...
The 2021 Emmys came and went like the wind, gathering a small section of Hollywood’s elite in a very small — and, as Seth Rogen pointed out, not exactl
by Ineye Komonibo
Somos Latinx
Jhay Cortez Steps Into The Spotlight With Timelezz
For years, Jhay Cortez paid his bills by making music for other artists. He was one of the masterminds behind J Balvin’s record-breaking album Vibras in
by Frances Solá-Sant...
Advertisement
Advertisement
Discover
R29 Stories & News
Watch
R29 Original Series & Films
Shop
R29's Most Wanted