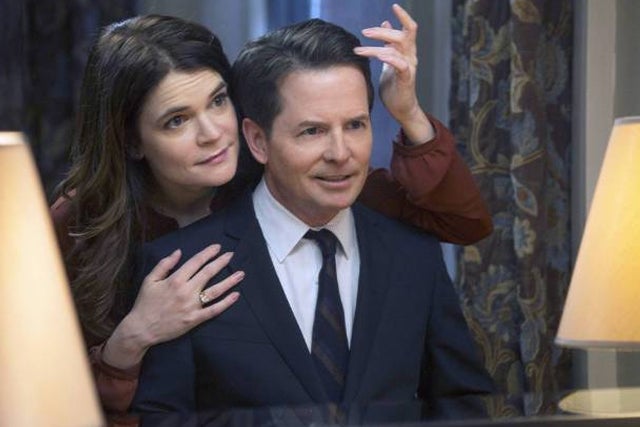 Photo: Courtesy NBC.
Tonight, Michael J. Fox returns to television. In his first starring role since he left Spin City over a decade ago, Fox is now the center of The Michael J. Fox Show on NBC. In this Modern Family-style mockumentary, Fox plays a variation of himself, a former NBC news anchor named Mike Henry whose Parkinson's diseases has forced him to retire. Along with his wife, played by Breaking Bad's Betsy Brandt, Henry's sister and his three children attempt to get him back to work. And his condition is never forgotten in the storyline. "We're not making fun of Parkinson's," Fox has said about the show. "We're examining a life that has Parkinson's and just how one guy deals with it,"
Advertisement
Whether that makes for good television, and whether it can help revive NBC's credibility, remains to be seen. In a bit of network self-deprecation, Henry's former colleague Harris, played by The Wire's Wendall Pierce, complains to him, "“No one’s watching the news anymore. We got beat by a show called Color Splash last night. That’s literally watching paint dry.” If only NBC's recent lineup were even that good.
Reviews of the show are mixed, and it currently holds a rating of 63 Metacritic. "In the context of all this flailing," writes Slate's Willa Paskin about NBC's struggle to find a winning sitcom, "The Michael J. Fox Show is a kind of victory: a show with broad appeal led by a still sparkly and high-strung Fox that is pretty good, a shade too predictable and manipulative to be excellent, but neither excruciating nor embarrassing. It seems like a hit."
Mike Hale at the New York Times, however, is not so optimistic about the show's likability. "Everything about his return to sitcom stardom is mild, tucked in, determined not to offend," he writes. "The problem is the feeling that you’re watching a long and expensive public service announcement."
The Washington Post's Hank Stuever was even less generous. "It wants to be funny, it wants to be urbane, it wants to be human and it wants to nail every line. Where it fails miserably is in premise and character," he writes. "The disease is the bad guy and the butt of all the jokes; its symptoms are presented as an entertaining set of quirks."
But will audiences will be able to look past that or just see through it?
Somos Latinx
In Vampire Academy, Daniela Nieves Delivers a New Kind of ...
Ever since she was very young, Daniela Nieves has had a penchant for chit-chat.  “Once you know me, just as a person, I love to talk,” Nieves, the
by Mekita Rivas
Movies
Tyler Perry Makes A Pivot With A Jazzman’s Blues — But Doe...
This story contains spoilers for Netflix film A Jazzman’s Blues. Just months after resurrecting Madea for a film that no one asked for (Madea as Beyoncé
by Ineye Komonibo
Unbothered
The Problem With How We’re Talking About The Nia Long & Ime Udoka...
For as long as I can remember, Nia Long has been the woman of everyone’s dreams. She’s played some of the most adored characters in Black cinema, and h
by Tayo Bero
Advertisement
Movies
Don’t Worry Darling Can’t Overcome The Rumors
Spoilers ahead. In the world of Don’t Worry Darling’s Victory, a sun-cloaked desert planned community, 1950s-era gender roles are alive and things aren
by Katherine Singh
Unbothered
Sanaa Lathan Is A Director Now & On The Come Up Is Her T...
Welcome to “What’s Good,” a column where we break down what’s soothing, distracting, or just plain good in the streaming world with a “rooting fo
by Kathleen Newman-B...
Disney
How To Score A Disney+ Subscription (Even If It’s Just For ...
I say “Disney” you say “land,” or “world,” or perhaps now during the height of at-home streaming, you chime “plus
by Alexandra Polk
Unbothered
John Boyega Says He Only Dates Black Women — What’s The Issue?
British-Nigerian actor John Boyega is the latest subject of online discourse this week, and surprisingly, it’s not because of his stellar (and thirst-ind
by Ineye Komonibo
Dedicated Feature
This New Horror Film Will Give You A Fear Of… Smiles
When it comes to horror movies, there isn’t a whole lot that we haven’t seen: mask-wearing killers, extraterrestrial life, monsters that take on every
by Andrea Cheng
Unbothered
Bravo’s Real Girlfriends in Paris — Like Emily In Paris...
When Emily in Paris premiered on Netflix in 2020, audiences excitedly tapped into plucky protagonist Emily Cooper’s (Lily Collins) quarter-life crisis as
by Ineye Komonibo
Somos Latinx
Jessie Reyez Finds Healing On YESSIE — & You Will, Too
Ten seconds into Jessie Reyez’s debut album, “Before Love Came to Kill Us,” she sings, “I should’ve fucked your friends. / It would’ve been the
by Brenda Barrientos
Movies
Do Revenge Wants You To Embrace Your ‘Glennergy’
Spoilers ahead. When Drea Torres (Camila Mendes) and Eleanor Levetan (Maya Hawke) first pair up in Netflix’s Do Revenge, they’re raging. They’ve
by Katherine Singh
Mi Casa Es
Oye Mi Canto: The Nostalgic Music That Cures Our Homesickness
Music is a powerful catalyst in evoking memories of a time and place that’s far away. In the 2017 Oscar-winning animated fantasy “Coco,” it’s the s
by Marjua Estevez
Advertisement
Advertisement
Discover
R29 Stories & News
Watch
R29 Original Series & Films
Shop
R29's Most Wanted