Skip navigation!
Story from Hair
Whenever we make the mistake of feeling like we've seen it all when it comes to top knots, updos, and everything in between, something like Maria Bello's "deconstructed knotted updo" appears and proves us wrong. Very wrong. Celebrity hairstylist Jonathan Hanousek crafted this gorgeous, vertical tri-bun by first creating a tousled texture, using leave-in conditioner and White Sands Gluten-Free Undercover Styling Spray.
After her hair was scrunched and dried, Hanousek sectioned it out, pulling her hair into three small, tight ponytails in a straight line (we would have loved to see this in-process step). He says, "Next, take the top hair and loosely gather into the last ponytail. You want to keep height and texture on top." Hanousek proceeded to tie the first two ponytails together, criss-crossing the ends underneath, and fastening with bobby pins. Finally, he divided the hair of the last two ponytails, tied them into knots, and pinned them. It sounds like a complicated process, but really, it's just a series of knots — if you can handle one knot, we have faith that you can master this as well.
Advertisement
So, what do you think? Are three knots better than one? We honestly think the name of this 'do sounds a lot like an undergraduate interdisciplinary course, and one that we would probably want to take. (Zimbio) 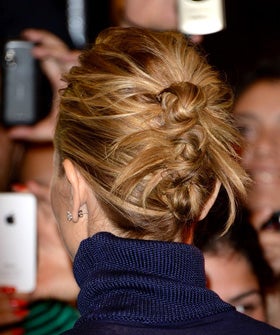 Like this post? There's more. Get tons of beauty tips, tutorials, and news on the Refinery29 Beauty Facebook page. Like us on Facebook — we'll see you there!
Advertisement
Hair
9 Curly Haircuts For When You Want To Go Short
by Thatiana Diaz
Hair Color Ideas
Rose Gold Hair Is Making A Big Comeback For Spring 2020
by Megan Decker
Hair
I Tried Trendy “Face Frame” Highlights — & Here’...
While social media keeps us dreaming of the boldest hair colors, when it comes to actually facing the bleach bowl, sometimes subtle and natural is the best
by Thatiana Diaz
New Beauty Trends
These Chic Hairstyles Make Rainy Days Feel Brighter
by Megan Decker
Hair
Drunk Elephant Is Launching Its First Hair Line With Jennifer Ani...
Remember when Jennifer Aniston told everyone about a Drunk Elephant hairspray and we all cried internally when we found out it wasn’t available yet? The
by Tara Edwards
Celebrity Beauty
Kylie Jenner Shows Off Yet Another New Hair Look That’s All Valen...
The Kardashian-Jenner sisters are each trendsetters in their own right, so it shouldn’t be surprising that sometimes they steal ideas from each other. Ki
by Tara Edwards
Hair
15 Street Style Looks That Prove The Versatility Of Black Hair
by aimee simeon
Hair
Where Do Synthetic Wigs Go When We’re Done With Them?
2020 has put sustainability on the path from buzzword to absolute necessity (better late than never, it seems). As mounting pressure is rightfully placed o
by Rhea Cartwright
Hair
6 Hairstyles Our Editors Are Wearing This Valentine’s Day
by Thatiana Diaz
New Beauty Trends
NYC’s Fashion Elite Is Making A Killer Case For Bangs For S...
by Megan Decker
Hair
DevaCurl Creates “Curl Care Council” Following Hair-L...
Update: Following the backlash from influencers and customers who spoke out about their alleged experiences with hair loss and scalp damage they believe to
by Thatiana Diaz
Hair
The Cool-Girl Hair Color Sweeping The Streets Of NYC
by Megan Decker
Discover
R29 Stories & News
Watch
R29 Original Series & Films
Shop
R29's Most Wanted