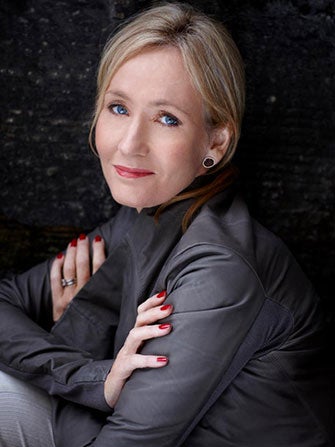 Photo: Via J.K. Rowling's Facebook.
Huge news just broke across Hollywood and the wizard world alike. Potterphiles, are you sitting down? J.K. Rowling, your reigning Queen and the spiritual light that guides you, just announced on Facebook that she is working on a spin-off movie of the beloved Potter series for Warner Bros. Harry, Ron, Hermione and friends won't be making an appearance. Instead, the story takes place 70 years prior to Harry's birth (so, sometime in the 1920s) in New York City! It centers around a deep-cut character who will already be familiar to super-fans.
Newt Scamander, author of Hagrid's go-to Sunday read Fantastic Beasts and Where to Find Them will be our new hero. It's well-known that Rowling has laid out much, much more background about the various plot points and characters than ever made the final cut for the books (much less the movies). Apparently, Scamander is a particularly beloved side character. Says Rowling, "I liked him so much that I even married his grandson, Rolf, to one of my favourite characters from the Harry Potter series, Luna Lovegood," she said. This is awesome not only because we're getting more canonical content, but also because we'll hopefully get to explore some of our questions about the series. We've always wondered how wizarding law and culture differs across the globe, and while we got a glimpse of it at the Triwizard Tournament, Rowling confirms that in Fantastic Beasts, "the laws and customs of the hidden magical society will be familiar to anyone who has read the Harry Potter books or seen the films."
Next up: Can we get a movie version of The Life and Lies of Albus Dumbledore? Please? (USA Today)
Advertisement
Entertainment
Jessica Batten Tearfully Responds To Love Is Blind Backlas...
This post contains spoilers for the Love Is Blind finale, out now. The Love Is Blind hive has grown into a swarm, and its sights are set on Jessica Batten.
by Kathryn Lindsay
TV Shows
All The Singers Left On The Masked Singer Season 3
by Leah Marilla Thomas
TV Shows
The Celeb Behind The Kitty On The Masked Singer Might Be F...
The second group of contestants on the Masked Singer is stacked with secret celebs who consistently deliver nearly pitch perfect performances and choreogra
by Ariana Brockington
TV Shows
The Masked Singer’s Taco Has Probably Been To Infini...
What would we do without The Masked Singer? It is the only show on television where you can watch a grown man dressed as a taco effortlessly, confidently,
by Ariana Brockington
Entertainment
John Mulaney Uncovers Pete Davidson’s Secret Life On Sat...
Will the real Pete Davidson, please stand up? In a new promo for Saturday Night Live starring guest host John Mulaney, Davidson — who recently took a swi
by Kaitlin Reilly
TV Shows
Everyone Who’s Been Unmasked On The Masked Singer Se...
by Ariana Brockington
Entertainment News
Bachelorette‘s Chad Johnson Explains Arrest For Robb...
In a new Instagram video, Chad Johnson shared his side of the story on his recent arrest for robbery. Johnson talked directly to the camera in the video as
by Kaitlin Reilly
TV Shows
All The Celebrities Who’ve Been On The Masked Singer...
by Ariana Brockington
TV Shows
Altered Carbon Season 2 Is John Wick “Gun Fu” — & More S...
A small squad of gun-toting imperial fighters marches through a Vancouver soundstage. The light-up red eyes on their helmets shine through the pitch black
by Ariana Romero
Music
There’s Already A Wild Theory About Taylor Swift’s “The Man...
Taylor Swift has reinvented herself through several different eras of music, but it seems like there’s one common denominator: Kanye West. His infamo
by Kathryn Lindsay
Pop Culture
Prince Harry Just Changed His Name — Sorta
In his effort to transform from a royal famous person to a regular famous person, Prince Harry is making yet another big life change. Prince Harry is now g
by Kaitlin Reilly
TV Shows
The I Am Not Okay With This Soundtrack Is Full Of John Hu...
by Shannon Carlin
Discover
R29 Stories & News
Watch
R29 Original Series & Films
Shop
R29's Most Wanted