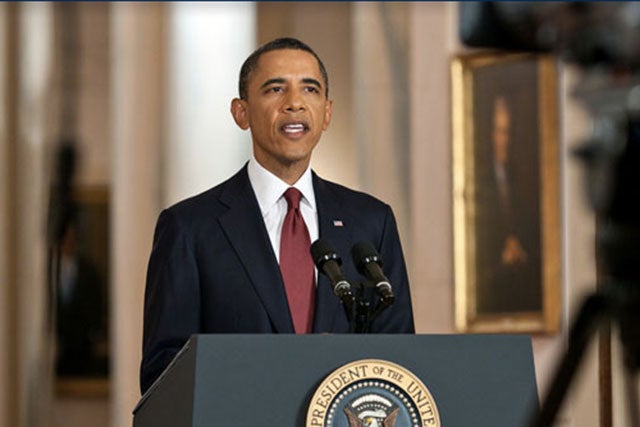 Photo: Courtesy of White House
In what is only his ninth Presidential address, Barack Obama took to the airwaves tonight to face the nation and speak about the ongoing crisis in Syria. For the past few weeks, our country — and the world at large — has been in the midst of a passionate debate surrounding the appropriate response. In the days leading up to the address, the President has favored a military intervention — albeit a limited one — but recent developments (specifically Syria's agreement to a Russian-backed deal to turn over its remaining chemical weapons) have made his argument slightly less secure.
Obama started his speech with a harrowing description of the August 21 chemical attacks in Syria, laying out the justification for the use of force within the country. He also addressed the many reservations that members of the government and American citizens have raised over military intervention, pledging that any targeted attack the U.S. enforces will not involve boots on the ground, or threaten American lives. He made clear that he believes the only thing that will deter Assad from using chemical weapons again is the threat of a strike.
However, he turned the tables a bit from there, announcing that he has asked the Senate to delay a vote over military intervention, to allow the UN to explore the agreement between Russia and Syria. Obama stated that, as with most of the world, he prefers to resolve this diplomatically, and not militarily, by forcing Syria to deplete its chemical weapon stockpile. Of course, this isn't the end of the discussion of a targeted attack — if the agreement fails to move forward in a timely manner, the U.S. will resume voting on the matter. "What kind of world will we live in if the United States of America sees a dictator brazenly violate international law with poison gas, and we choose to look the other way," he asked. "That's what makes America different, that's what makes us exceptional...let us never lose sight of that essential truth." See the video below for a clip of the speech.
Latinx
We Need More Moms in Politics. But the Election Process Isn’t Bui...
Most of us have ideas of what makes a mama: she’s either pulling up to the school drop-off with a perfect manicure or barely holding it together. As if t
by Jessica Altagraci...
Abortion Access For All
In A Post-Roe World, Here’s What First-Time Voters...
Today is the first federal general Election Day since the Supreme Court voted to overturn Roe v. Wade, the landmark decision that protected a person’
by R29 Team
Somos Latinx
After Getting an Abortion in the US, This Mexican Activist Is Now...
Gente Power is a monthly Somos series profiling the Latine activists, cultural workers, educators, and movement leaders creating change in their communitie
by Elsa Cavazos
Advertisement
Somos Latinx
Dominicans Protested the Violence of Christopher Columbus Celebra...
The UNESCO World Heritage agency describes Santo Domingo not only as the capital of the Dominican Republic, but of the West Indies historically, and romant
by Marjua Estevez
Unbothered
If Your Feelings About The Queen’s Death Are Complicated, That...
On September 8, Her Majesty Queen Elizabeth II passed away at the age of 96, after 70 years as the nation and commonwealth’s monarch. In the days sin
by L'Oréal Blackett
Unbothered
The Most Disrespected Group Online Are Black Women — This CEO Is ...
“The most disrespected person in America is the Black woman…” said civil rights leader Malcolm X, more than 50 years ago. Speaking directly to Black
by L'Oréal Blackett
Abortion
Why Kamala Harris Feels ‘Optimistic’ About The Future...
It wasn’t hard to see the symbolism in the torrential rains that preceded Vice President Kamala Harris’s visit to Indianapolis, IN, on July 25. One mon
by Molly Longman
Unbothered
Why I’m Only A Black Woman On Sundays
I am only a Black woman on Sundays.  Let me clarify.  I am a 21-year-old Black nonbinary person. I was assigned female at birth. My pronouns are
by Reegan Saunders
Unbothered
Mo Farah Bravely Told Us Who He Really Is — Now All Trafficking V...
How do you tell people that you are not actually who they think you are? This week, world-famous British sportsman Mo Farah did so, taking the brave step o
by Banseka Kayembe
Abortion Access For All
“A Minor Victory.” Abortion Care Resumes In Three Trigger States ...
The article is being updated as more news about temporary injunctions and restraining orders impacting abortion access comes out. It was originally publish
by Molly Longman
Unbothered
On Ketanji Brown Jackson, ‘Making History,’ And The Expense Of Bl...
Update: Justice Ketanji Brown Jackson has been sworn in to the Supreme Court as the first Black woman sitting on the nation’s highest court. Jackson
by Brea Baker
Abortion
Support Abortion Access With R29’s Capsule Tee Collection
As of June 24, our constitutional right to abortion no longer exists. It’s hard not to feel helpless, angry, and scared during a time like this, but for
by Elizabeth Gulino
Advertisement
Advertisement
Discover
R29 Stories & News
Watch
R29 Original Series & Films
Shop
R29's Most Wanted