Skip navigation!
Story from Entertainment
When Fred Armisen got a call from a generic NBC phone number, and the person on the other end told him he'd landed a gig on Saturday Night Live, he saved the number in his phone as "Best Call Ever", then proceeded to freak out. So, if you're seeing SNL's need to replace Bill Hader, Fred Armisen, Jason Sudeikis, and Seth Meyers as your golden opportunity to finally audition for the show, take heart. Armisen says when it comes to auditioning, "There's no science to it." You, too, could be on the receiving end of a similar phone call. And according to many of the cast members, their auditions didn't even elicit any laughs from the venerable Lorne Michaels.
Advertisement
In the New York Times piece "The God of 'SNL' Will See You Now," 22 former and current cast members recall their hysterical audition experiences, and the set of stories reads as a playbook for pleasing Michaels. Kristen Wiig bought a stopwatch to make sure she didn't go over the recommended five-minute limit on stage; Bill Hader sized up his competition, later realizing it was Andy Samberg; Will Ferrell entered a meeting with Michaels planning to jokingly bribe him with Monopoly money, but got so scared that he didn't end up doing it.
Cast members also offered up their completely inspiring stories about their lives leading up to their life-changing audition — even if that was just what they were doing the day before. Molly Shannon used her waitressing money to make a tape of her best characters (and was mugged right after her audition); Tracy Morgan had a wife, three sons, and was on welfare; Cheri Oteri was temping in Disney's legal office. Though the cast have vivid memories of their lives before their fateful audition days, Armisen notes that the actual audition is a bit of a blur: "The best thing in your life you don't have a memory of because they go by so quickly." Check out the full feature, though be warned: You may feel tempted to quit your day job. (New York Times) 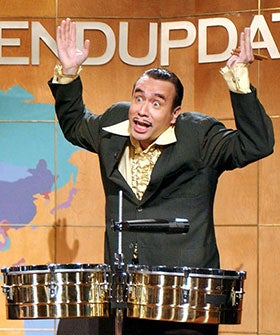 Photo: Via NYT.
Pop Culture
Jamie Lynn Spears Is Back & Telling That Zoey 101 Pregna...
Jamie Lynn Spears knows that you still blame her and her pregnancy for the end of Zoey 101. But she’s back to not only set the record straight, but a
by Natalie Morin
Movies
The Christmas Chronicles 2 Is Like The Avengers...
If you don’t think true love exists, then you haven’t heard of The Christmas Chronicles, and the fact that real-life, ionic couple Kurt Russell
by Natalie Morin
Pop Culture
Why You Should Be Especially Excited For Adele’s SNL...
We all know that Adele is a talented singer, but on the upcoming episode of Saturday Night Live, the British songstress won’t be hitting the stage as the
by Ineye Komonibo
TV Recaps
R29 Binge Club: Netflix’s Grand Army Recaps
Warning: This article contains descriptions of sexual assault. In Grand Army’s pilot, there’s a bomb — that is, a literal one. An explosion from a fe
by Lydia Wang
Amazon
The Best Amazon Prime Halloween Movies
by Kaitlin Reilly
Books & Art
20 Terrifying Books For When You’ve Already Read All The Sp...
by Shannon Carlin
Movies
Viola Davis Transforms Into The Mother Of Blues In Netflix’...
When you think of blues icons, names like B.B. King, Ray Charles, and Muddy Waters often come to mind almost immediately, but we wouldn’t have blues as w
by Ineye Komonibo
Pop Culture
Matthew McConaughey Tells The True Story Of How His Dad Died Duri...
When it comes to Matthew McConaughey — Magic Mike star, Texan icon, Wild Turkey Guy, king of the over-the-top Lincoln commercial speeches — he could te
by Natalie Morin
Documentary
The Haunting True Stories Behind Unsolved Mysteries’...
by Sarah Midkiff
Music
Lovecraft Country’s Soundtrack Boasts Blues Classi...
by Kelsea Stahler
Pop Culture
Meghan Markle & Prince Harry Recreate Their First Official Portra...
It’s been awhile since Meghan Markle and Prince Harry have been in the spotlight, but the royal pair is gearing up to be the center of attention in the u
by Ineye Komonibo
Best of Netflix
Everyone Is At Home Watching These 10 Shows & Movies On Netflix R...
by Ineye Komonibo
Discover
R29 Stories & News
Watch
R29 Original Series & Films
Shop
R29's Most Wanted