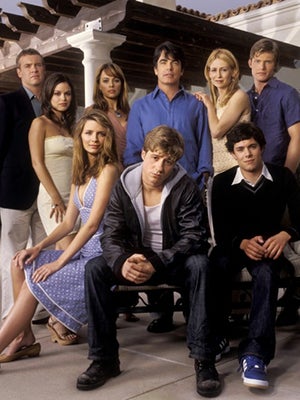 Photo: Courtesy of Warner Bros Television.
Usually a 10-year anniversary calls for a reunion, but that's not the case for the rich kids of Newport Beach. It's been a decade since The O.C. and its ruthlessly indie soundtrack burst out from the zeitgeist's periphery, and the show's creator, Josh Schwartz, was hoping to get the cast together to, you know, commemorate its legacy. Mischa Barton, however, felt differently.

"I think things have to feel right, and it doesn't feel right," she told
Us Weekly
. Schwartz was keen to the idea, but wished for everyone to want to be on board. And understandably so. Without Marissa Cooper's now iconic "Hey" missing, it would feel wrong. Barton instead wants to focus on her own career, one that she believes was sacrificed for the greater good and success of The O.C. Oh well. There's always the 15-year reunion. Fingers crossed she'll be on board by then. (TV Guide)

Somos Latinx
6 Top Latine Podcasts Shifting Culture In 2022
Latines grew up in the midst of stories, conversations, and connection — aquí y allá. Some of us watched our older primas get ready for a night out, be
by An Editorial Coll...
Somos Latinx
Emmy Winning Actor-Turned-Rapper Jharrel Jerome Has Something To Say
Born to traditional Latine and Black American parents in the Bronx, Jharrel Jerome was tasked with discovering what personally tethered him to the characte
by Marjua Estevez
Somos Latinx
Do Revenge’s Drea Torres Ditches the Girlboss & Beco...
When I put on Netflix’s Do Revenge, I expected to watch the usual empty representation teen flick with no depth that is normally available for streaming.
by Nicole Froio
Advertisement
Unbothered
Get To Know The New Faces Of Black Panther: Wakanda Forever
It’s been four long years since the Marvel Cinematic Universe last whisked us to Wakanda in Avengers: Infinity War, and a lot has changed since Thanos (J
by Ineye Komonibo
GG Good Game
Twitch Is For Makeup Too – Just Ask Body Painter Melissa Croft
“Put some care into making sure you’re truly yourself.” That’s the takeaway for Twitch streamer Melissa Croft, which is interesting considering the
by Eleni Thomas
Movies
Leave Marilyn Monroe Alone
Content warning: This piece contains references to physical and sexual violence. When you think of tragic heroines of Hollywood’s golden age, your mind p
by Katherine Singh
Somos Latinx
Hocus Pocus 2’s Belissa Escobedo Also Practices Bruj...
Belissa Escobedo is a Los Angeles-raised Chicana, the biggest cat mom ever (self-proclaimed), a former theater kid, possibly America Ferrera’s long-lost
by Priscilla Rodriguez
Unbothered
The Meaning Behind Stormzy’s “Mel Made Me Do It”...
Stormzy dropped his new single Mel Made Me Do It casually the night of Thursday, September 22 and, within minutes, Twitter (his least favorite place) was i
by Nikki Onafuye
Unbothered
Don’t Worry Darling Is Peak White Feminism (As Expected)
Spoilers ahead. Don’t Worry Darling is the latest in a long continuation of movies that discuss female catharsis and misogyny but fails to acknowledge ra
by Haaniyah Angus
Somos Latinx
In Vampire Academy, Daniela Nieves Delivers a New Kind of ...
Ever since she was very young, Daniela Nieves has had a penchant for chit-chat.  “Once you know me, just as a person, I love to talk,” Nieves, the
by Mekita Rivas
Movies
Tyler Perry Makes A Pivot With A Jazzman’s Blues — But Doe...
This story contains spoilers for Netflix film A Jazzman’s Blues. Just months after resurrecting Madea for a film that no one asked for (Madea as Beyoncé
by Ineye Komonibo
Unbothered
The Problem With How We’re Talking About The Nia Long & Ime Udoka...
For as long as I can remember, Nia Long has been the woman of everyone’s dreams. She’s played some of the most adored characters in Black cinema, and h
by Tayo Bero
Advertisement
Advertisement
Discover
R29 Stories & News
Watch
R29 Original Series & Films
Shop
R29's Most Wanted