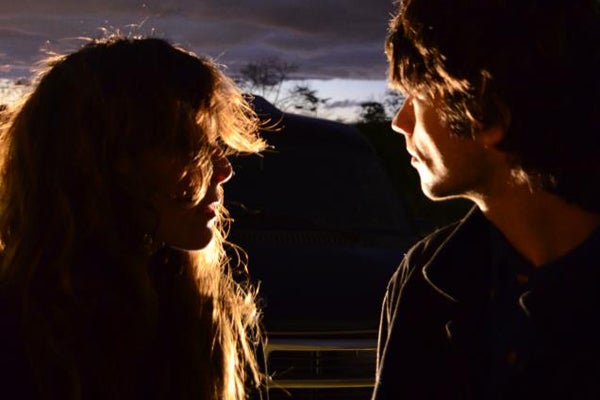 Though many of us are still recovering from a whirlwind weekend at the Pitchfork Music Festival, it's already time to start thinking about heading back to Chicago. That's right, Lollapalooza is just around the corner, and this year's edition has a killer lineup. Highlights include reunited industrial king Nine Inch Nails, Chicago native Chance the Rapper, and firecracker MC Azealia Banks. We've rounded up our favorite bands to catch below, along with a list of every artist playing the fest organized by day. See you August 2!

Nine Inch Nails
Sure, How to Destroy Angels has its fans, but for Trent Reznor acolytes, the absence of NIN was always a huge bummer. Now the band is back in action with a new stage show, new album, and 30 years worth of dark-industrial pop.

Death Grips
Noise-rap provocateur Death Grips has made headlines fighting with its record label, posting unconventional album art, and generally pushing everyone's buttons. Beyond the controversy, though, is some of the most searing, progressive music being made today.

Beach House
If there's any sound more beautiful than Beach House vocalist Victoria Legrand's voice, we have yet to discover it. Always a pleasure, Beach House is the welcome flip side of a festival filled with high-energy rock and hip-hop.

Azealia Banks
At Glastonbury, we were treated with brand-new material from Banks in the form of the Pharrell-featuring "ATM Jam." Who knows what Ms. Banks will bust out at Lolla — be it more material from her upcoming record or a different dinosaur costume.

Chance the Rapper
One of the best albums of the year so far was Acid Rap, the latest mixtape from Chance the Rapper — so good, in fact, that it made it onto the Billboard charts even though it could be downloaded entirely for free. A Chicago native, Chance has been likened to André 3000, Kendrick Lamar, Lil Wayne, and more. In reality, he's managed to carve out a style all his own.

The National
Just off the release of its new album, Trouble Will Find Me, The National is back on the road. After more than a decade together, the band has morphed into one of the most powerful stadium-rock bands and turned its brand of barroom depression into a science.

Hot Chip
After leaving Coachella and being confronted by R. Kelly vs. Phoenix, Yeah Yeah Yeahs, Modest Mouse, and more, Hot Chip may have quietly succeeded at playing the best set of the festival. You may not assume it, but Hot Chip is truly one of the best live bands in the world right now. Trust us.

The Postal Service
If you missed the band at Coachella or on its recent stadium tour, Lollapalooza is giving you another chance to relive the early aughts with The Postal Service. Sing-alongs are the name of the game for this one.

Kendrick Lamar
Just one year ago, Kendrick was an upstart rapper from Compton. Now he's one of the biggest names in hip-hop playing huge sets to thousands. Thing is, we can't think of a rapper who deserves his success more.

New Order
One of this writer's top five favorite bands of all time, New Order have been making the best of its old age by playing massive shows across the world. From "Ceremony" to "Bizarre Love Triangle," no one has ever done emotional synth-pop better.

Living
This Couple Got Married While Running A Marathon — No, REALLY
What an amazing day!!! #marathonwedding @ChiMarathon pic.twitter.com/rHQ7HxkOfT — Stephanie Reinhart (@kitchy7) October 12, 2015 Like many couples, S
by Ally Hickson
Chicago
J-Lawr & Amy Schumer Boogie Atop A Piano During Billy Joel’...
First Taylor Swift, now Billy Joel. Apparently 2015 is the year that really famous pop stars bring other really famous celebrities onstage with them to per
by Elizabeth Kiefer
Chicago
The Lazy Girl’s Guide To Amazing Skin: Summer Edition
by Melanie Rud Chadwick
Chicago
7 Cool Shops To Visit In Chicago This Weekend
by Christina Perez
Chicago
Found! The Perfect Last-Minute Summer Getaway
by Rebecca Taras
Chicago
7 Chicago Food Experts Reveal Their Fave Summer Eats (& More!)
There’s so much to love about Chicago summers, and tops among them is the food: The bounty of fresh fruits and veggies at farmers’ markets, the
by Judy Sutton Taylor
Chicago
20+ Pics Of Pitchfork’s Most Inspiring Street Style Stars
by Erin Donnelly
Chicago
How To Do Chicago Like A Lollapalooza All-Star
by Leah Pickett
Chicago
11 Chicago Dream Apartments To Rent Right Now
by Stephanie Sims
Chicago
18 Delicious Chicago Dishes For Your Foodie Bucket List
by Caroline Stanley
Chicago
Chicago’s Best Al Fresco Happy-Hour Spots
by Amelia Levin
Chicago
How Two Sisters Are Changing The Way We Namaste
We tend to think the best decisions in life are made over pizza. Case in point: One frigid January night last year at Pequod’s, sisters Natalie and A
by Jourdan Fairchild
Discover
R29 Stories & News
Watch
R29 Original Series & Films
Shop
R29's Most Wanted