Skip navigation!
Story from Entertainment News
Bey and Jay are arguably one of the busiest couples on the planet, but yesterday the hip-hop moguls took time out of their touring schedules to support a cause close to their hearts. Mr. and Mrs. Hova appeared at yesterday's Travyon Martin rally in New York City (one of about 100 that took place all across the country), fighting for justice alongside Al Sharpton and Martin's mother, Sybrina Fulton. Although they declined to speak at the event — in an attempt to keep the focus on the true issue at hand — their presence was felt among the thousands of New Yorkers protesting George Zimmerman's "not guilty" verdict.
Advertisement
During his speech, Sharpton acknowledged the couple's appearance and lasting dedication to solving our country's disheartening injustices. "Let me tell you that before a lot of you were down, Jay Z supported us," said Sharpton. "Jay Z told me, 'I'm a father. Beyoncé is a mother.' We all feel the pain and apprehension — the laws must protect everybody, or it doesn't protect anybody." Jay Z, who is in town for stops on his Legends of the Summer Tour (with Justin Timberlake), also took a moment during his Friday night show at Yankee Stadium to spread the word, dedicating his final song, "Forever Young," to the memory of Trayvon Martin.
While a celebrity endorsement certainly doesn't make or break a cause, we're touched that the couple is so dedicated to fighting for equal rights in this country — with more than just the occasional Tweet or statement from a publicist. Here's hoping that Bey and Jay's presence enlightens more Americans to this issue, and that we all take a page out of their book and start standing up for what's important. (Rolling Stone) 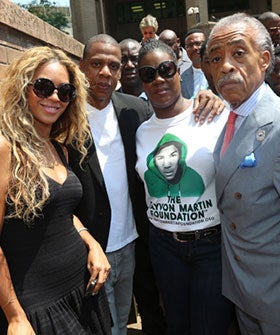