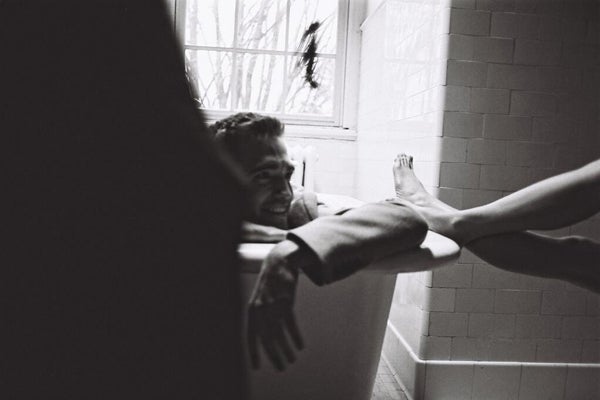 Dior's latest teaser for the men's fragrance campaign starring Robert Pattinson is more foreplay and less action, but satisfying nonetheless. "A new story is about to start. Robert Pattinson for Dior Homme Parfum. #DiorRob," came @Dior's official tweet. The black-and-white photograph shows a backlit RPattz casually draped over a bathtub, wearing a suit jacket. (Because, who doesn't wear designer duds in the tub?) And, while we're always psyched to see pics of the Twilight star, it poses several questions: Who does that mysterious leg belong to? Why is he in a bathtub?
Sadly, those answers won't come until September, when the final images are released, but we'd like to think we're of "The best things in life are worth waiting for" mindset. (ELLE UK)

Most Wanted
8 Elevated Fragrances Your Guy (& You) Will Love
Whether it’s our bod or our apartment, we want it to smell good. This is true 365 days a year, but if your Valentine’s Day plans include snuggling with
by Karina Hoshikawa
Beauty
This Luxury Perfume Is Totally Unique — & Worth The Splurge
There is no shortage of luxury fragrances in the world of perfume. But even in a market that is, by definition, all about luxury, a $300 bottle can make yo
by Mercedes Viera
Beauty
This Perfume Broke The Internet & It’s The Perfect Valentine’s Da...
PerfumeTok is a space where TikTok’s fragrance fanatics gather to discover and review the good, the bad, the niche, and the trending in perfume.
by Jenny Brownlees
Advertisement
Beauty
Get These 8 Soon-To-Be Viral Perfumes Before TikTok Sells Them Out
by Jacqueline Kilikita
Beauty
6 Genderless Fragrances That Are Anything But Boring
Whether you’re an olafactory fanatic looking for your new signature scent or you’re just starting to dip your toes into the genderless scented
by Mercedes Viera
Fragrance
21 Fresh Fragrances For When You Just Want To Smell Clean For Val...
by Karina Hoshikawa
Gift Guides
These 18 Perfume Gift Sets Make For Aromatic Gifting Material
by Mercedes Viera
Beauty
You Can Pick Up These Amazing Perfumes For Less Than $30 At Target
You’re reading an On-Site Shopping story — meaning you can browse, add to cart, and actually purchase the product recommendations featured below withou
by Venus Wong
Most Wanted
5 Spicy & Warm Fall Fragrances That Are Compliment Magnets
“Slow and steady wins the race.” “The early bird catches the worm.” Adages often stand the test of time across the centuries not ju
by Mercedes Viera
Most Wanted
Charli D’Amelio’s First Perfume Isn’t Just For ...
TikToker and Dancing With The Stars contestant Charli D’Amelio is part of a crop of multi-hyphenate Gen Z celebs who seem to do a little bit of every
by Mercedes Viera
Most Wanted
5 Under-$100 Fragrances You’ll Want This Fall — From Fresh ...
If you’re a fragrance-lover, you know a new season means a brand-new scent, but that doesn’t mean you have to spend hundreds of dollars to get
by Mercedes Viera
Most Wanted
DedCool’s Milk Just Got Intense — & We Couldn’t Be Mo...
DedCool did it again. It made our wildest dreams come true. The effortlessly cool fragrance brand just launched two new awe-inspiring scents: XTRA Milk and
by Mercedes Viera
Advertisement
Advertisement
Discover
R29 Stories & News
Watch
R29 Original Series & Films
Shop
R29's Most Wanted