During these hot, muggy days in Washington, we give thanks to the inventors of air conditioning — and the genius who dreamed up iced coffee. And while AC is great as-is, iced coffee just keeps getting better and better, thanks to local baristas who are obsessed with finding ways to brew the perfect cup of chilled java.
When it comes to our icy bev of choice, there are two main schools of thought: Either the coffee is brewed with hot water directly over ice (a method that originated in Japan), or it's steeped with cold water over several hours and then strained. Either way, you end up with delicious chilled coffee, minus any bitterness. We tracked down a few places around town where you can sample brews made via both methods, ranging from beloved coffeehouses to new java spots you need to try. Keep reading for a caffeine fix that will combat even the swampiest of summer days.
Advertisement

The Japanese Iced Method
For iced pour-over coffee, the baristas at Pitango Gelato use a Chemex beaker, a tool that looks straight out of a science lab. The meticulous process of brewing coffee over ice via the Chemex is repeated every four hours for iced coffee that's bright, mellow, and totally refreshing. P.S. If you can't decide between coffee or gelato, Pitango's affogato combines the best of both worlds, with a shot of espresso accompanied by a scoop of any gelato your heart desires.
Pitango Gelato, 660 Pennsylvania Avenue SE, 202-701-6222; 413 7th Street NW, 202-885-9607; 1451 P Street NW, 202-332-8877; 11942 Democracy Drive, Reston, 703-606-9906.

Pop-up coffee shop The Wydown opened a month ago on U Street, and will be open for six months until the operation heads to its permanent home in the new Louis apartment building on 14th Street NW. In addition to the regular iced coffee brewed over ice, you can order any type of coffee you want ground, brewed, and iced as you watch. Bonus: This isn't on the menu, but ask your barista to whip up a "shakerato": a double shot of espresso, housemade vanilla bean syrup, and a shot of half & half shaken with ice in a cocktail shaker until frothy.
The Wydown Coffee Bar, 1320 U Street NW; 202-506-2756.
Advertisement 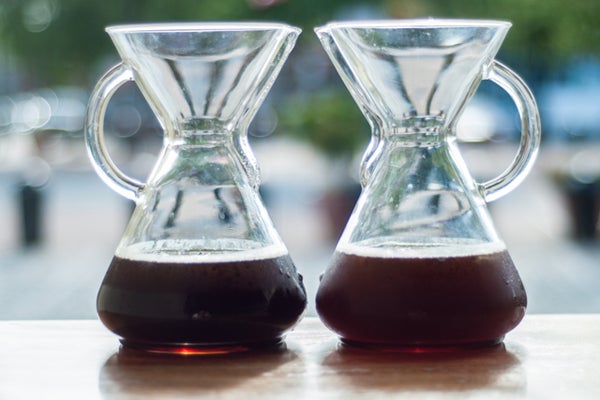 Cold Brew Iced Coffee
D.C.-based startup Growl Cold Brew Coffee wants to stock your fridge with everything you need to make your own iced lattes and cortados. Made with Annapolis' own Ceremony Coffee Roasters beans, Growl's coffee steeps in cold water for 16 hours, is filtered sparingly, and then bottled. Find the 16-ounce bottles of coffee concentrate online or at locations including Union Market's Salt & Sundry, Smuckers Farm Market, or at the company's booth at the monthly DC Meet Market.

For The Best Of Both Worlds
Try a Honey Badger, the iced specialty drink at adorable outpost The Coffee Bar near Logan Circle. It's four shots of espresso, two ounces of half & half, and a half-ounce of honey, all shaken together with ice for a creamy, sweet pick-me-up.
The Coffee Bar, 1201 S Street NW, 202-733-1049.

Photo: Courtesy of Carly Piersol
Unbothered
#BlackburnTakeover Protests: A Howard University Student Reports ...
It’s Homecoming season at Howard University, but there’s a noticeable difference on the HBCU campus this year. Students line up under canopies offering
by Michelle H.
News
It Isn’t Just The Government That’s Under Attack — It...
When thousands of violent extremists incited by President Donald Trump burst into the Capitol building yesterday, it instantly dominated news coverage. But
by Natalie Gontcharova
Work & Money
What $100 Will Get You In Each State
Folks, it might be time to consider relocating. The Bureau of Economic Analysis recently released a report measuring price disparities across different sta
by Jessica Chou
Advertisement
Washington DC
Your Guide To An Awesome Last-Minute Getaway Near D.C.
by Ayren Jackson-Can...
Entertainment News
Rihanna Rings In The United States Of Amerihca
by Hayden Manders
Entertainment News
Girl Hopes For Beyoncé, Gets Obama Instead
You can't always get what you want. But, if you try sometimes, you just might find — wait, we got off track. You can't always get what you
by Hayden Manders
Washington DC
How The Nerd Prom Has Become The Coolest Ticket In Town
On one special night of the year, the men and women in D.C. trade in their pocket protectors and ID lanyards for pocket squares and custom gowns to attend
by Laura Schwartz
Washington DC
8 Things To Know This AM — Apr 30 2014
In D.C., the White House has issued a list of recommendations to colleges about how they should handle and prevent sexual assault on campus. (The Washingto
by Hayden Manders
Washington DC
Glitz, Glamour, & Spring Arrive In D.C. With Our Hollywood-Inspir...
by Ashley Mateo
Washington DC
This News Presenter Shares Her On-Set Routine
How do you like to start your day? What news show do you like to kick it off with? We don’t play favorites. Instead we feature anchors we love, one being
by The New Potato
Washington DC
Party (& Shop) Like A Star In D.C. With R29 & CUSP
Photographed by Jesse Webster. Fashion, like Hollywood, is constantly evolving. As fast as labels and designers can churn out new styles, there are up-and-
by Ashley Mateo
Home
6 Up-And-Coming Artists To Start Collecting Now
by Kristin Guiter
Advertisement
Advertisement
Discover
R29 Stories & News
Watch
R29 Original Series & Films
Shop
R29's Most Wanted