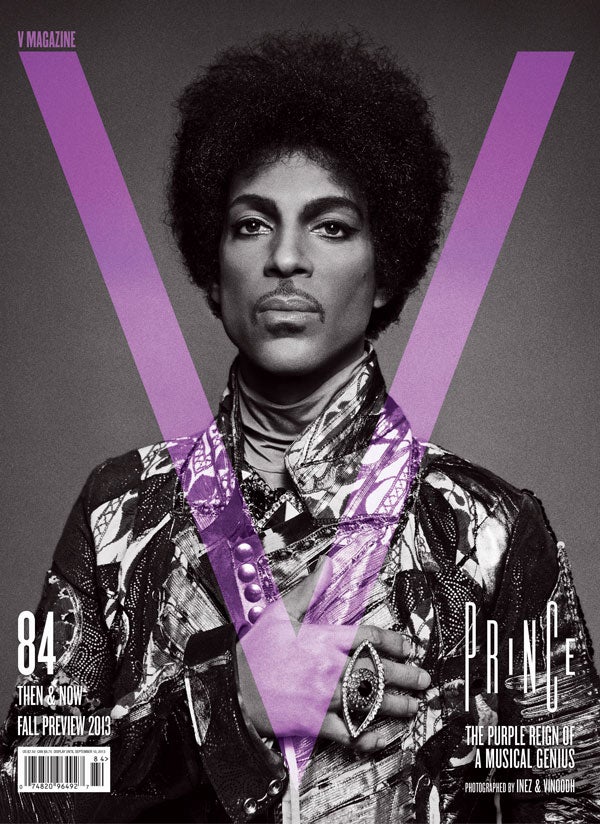 Dearly beloved, we have gathered here today to get through this thing called
V Magazine,
and the absurd awesomeness of cover star Prince. The notoriously tight-lipped musician dropped some seriously surreal gems for the August issue and posed for Inez & Vinoodh, looking like a timeless magician here to bring both funk and flavor. The interview is apparently mind-blowing. Because, according to Prince, no one can satisfy you like Prince can satisfy you: “People come to see us fifty times. Well, that’s not just going to see a concert—that’s some other mess going on. This music changes you. These people are not being satisfied elsewhere by musicians, you feel what I’m saying? It’s no disrespect to anyone else, because we’re not checking for them. But we don’t lip synch. We ain’t got time for it. Ain’t no tape up there.” 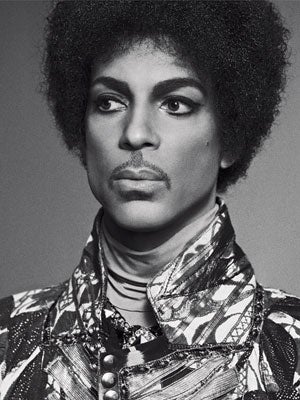 Another great quote from the piece, presented without comment. “This organization is different than most, in the sense that we don’t take directions from the outside world. It’s like a galaxy. The sun is in the center giving off energy, and everything revolves around it … Nobody really talks to me. Nobody talks to me a lot.” Prince, bringing you Poetry for the last 4 decades.
Last, but most certainly not least, he won't use a cell phone because according to him, it's annoying. He demonstrates this by mimicking a "high-pitched woman" asking, "Where is my phone? Can you call my phone? Oh, I can’t find it.” He sums it up simply, "Hell, no."
If only to be a fly on the wall of Prince's brain that is not quite a brain, but a purple universe of light and spirituality and love. We'd recommend going out and getting the issue immediately, and committing all of his Prince-isms to memory, stat.

Apple Products
The Best Black Friday Deals On Apple Airpods? We’re Listening
AirPods were a bonafide status symbol when they debuted in 2016‚ but these lil’ buds have become standard listening accessory just like any other house
by Alexandra Polk
Most Wanted
Hoover Up The Savings With These Black Friday Vacuum Deals
A good vacuum cleaner is like wi-fi. If the product is in peak performance mode, life is easy-breezy and dust-free-sy — but when it starts to lose its po
by Chichi Offor
Living
A Week In Seattle, WA, On A $107,500 Joint Income
Welcome to Money Diaries where we are tackling the ever-present taboo that is money. We’re asking real people how they spend their hard-earned money
by Refinery29
Advertisement
Most Wanted
Spoil Your Pet With These Black Friday Deals
Black Friday is always a fun time for humans; everything from jewelry to luggages to beauty products are always price-slashed to near-oblivion. However, th
by Karina Hoshikawa
Anthropologie
The Most Wonderful Anthropologie Deals To Shop Before Black Friday
There isn’t a better time of year to score big at Anthropologie. Although the retailer regularly rolls out promos on its plentiful wares, you can land es
by Chichi Offor
Dedicated Feature
8 Kitschy-Cool Gift Ideas For Your Most Eclectic Friend
by R29 Editors
Black Friday
Wayfair’s Black Friday Deals Are In The House — Literally
If there’s one thing to shop this week, it’s Wayfair Black Friday deals. Why? Because the mega online furniture warehouse is stuffed to the bri
by Alexandra Polk
Black Friday
15 Best Black Friday Mattress Deals Already On Our Radar
After almost two full years of whirlwind uncertainty, it’s the small things we’ve come to count on to bring us some much-needed consistency —
by Kate Spencer
Home
The Fan-Favorite Perfect Pot Is Officially On Sale For Black Friday
Super Sale Alert: There’s a good chance items featured in this story are currently on sale for Black Friday. For more need-to-know details on this ye
by Alexandra Polk
Unbothered
Proof That Black Women Music Artists Gave Us The Soundtrack To 2021
Let’s just go ahead and say Black women artists gave us the soundtrack to 2021. Megan. Chloé. H.E.R. Jazmine. Normani. And Go Off, Sis, the podcast from
by Taiia Smart Young
Black Friday
The 10 Best Bedding Deals At Brooklinen’s Black Friday Sale
Brooklinen‘s best-selling sheets, duvet covers, and comforters don’t come cheap, but according to scores of satisfied customers, they’re worth ev
by Lydia Wang
Black Friday
Everything You Need To Know To Shop The Best Black Friday Deals L...
The holidays get earlier every year. But while we may hotly debate when it’s ok to start blasting Mariah Carey’s Christmas hits, there’s
by Alexandra Polk
Advertisement
Advertisement
Discover
R29 Stories & News
Watch
R29 Original Series & Films
Shop
R29's Most Wanted