Skip navigation!
Story from Politics
After tensions reached a high in the last 24 hours, The New York Times reports that Egyptian President Mohamed Morsi has been ousted by the country's military, according to Egyptian media sources. Despite Morsi's insistence that he would not step down (even at the expense of his own life) and the presence of thousands of supporters in Cairo's Tahrir Square, the military initiated a coup at the presidential palace this evening. This comes after Morsi missed a previously imposed deadline to address a number of concerns that have dogged his one-year presidency both on the behalf of the military and the general public.
Advertisement
It's still not entirely clear where Morsi is, but his senior policy advisor Essam el-Haddad wrote this afternoon on his official site: “As I write these lines I am fully aware that these may be the last lines I get to post on this page. For the sake of Egypt and for historical accuracy, let’s call what is happening by its real name: Military coup.” The military has since provided an initial road map that includes a suspension of the constitution — to which protestors reacted with celebration and fireworks displays. (The New York Times) 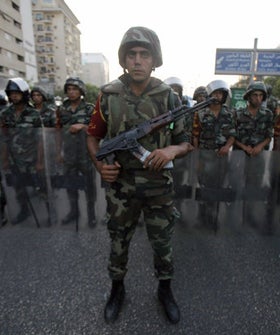 Image: Via The New York Times.

News
Republicans Like Jim Jordan Are Using COVID To Try To Ban Protests
In a heated exchange during a U.S. House subcommittee hearing about the coronavirus pandemic on Friday, Ohio Rep. Jim Jordan repeatedly goaded Dr. Anthony
by Erin Corbett
News
Trump Scrapped Jared Kushner’s COVID Plan Because It Would ...
For months since the coronavirus pandemic reached the United States, the Trump administration’s ignorance and obvious lack of preparedness have been call
by Elly Belle
News
Buddy The Dog Died Of Coronavirus — So Can Dogs Get It Now?
It’s official — the first dog to test positive for COVID-19 in the U.S. has died. Buddy, a 7-year-old German shepherd, was from Staten Island, NY, and
by Elly Belle
News
Ghislaine Maxwell Was Complicit In Jeffrey Epstein’s Abuses...
Virginia Roberts Giuffre claimed Ghislaine Maxwell sexually abused underage girls as young as 15 years old, according to 600 pages of documents newly unsea
by Erin Corbett
US News
Former Republican Presidential Candidate Herman Cain Dies Of Coro...
Herman Cain, former Republican presidential candidate and ex-CEO of Godfather’s Pizza, has died of coronavirus at 74, according to an obituary posted on
by Britni de la Cretaz
2020 Election
Trump Floats Delaying The Election — But Can He Actually Do That?
As the country prepares to vote by mail this fall due to the coronavirus pandemic, President Donald Trump is once again pushing his false claims that mail-
by Erin Corbett
US News
Oprah Is Honoring Breonna Taylor With A Historic Magazine Cover
Oprah Winfrey always graces the cover of her magazine. Each month, a different picture her looks out from newsstands next to the signature “O” of the t
by Britni de la Cretaz
News
Exclusive: Kamala Harris Introduces Bill On Uterine Fibroids
Sen. Kamala Harris is introducing a bill today to provide new funding for research and education on uterine fibroids, Refinery29 exclusively reports. New Y
by Natalie Gontcharova
2020 Election
Wait, What Does Biden Really Think About Kamala Harris?
Voters are eagerly awaiting the announcement of who will be presumptive Democratic nominee Joe Biden’s running mate and the race is heating up. It is bel
by Sarah Midkiff
US News
No, You Really Shouldn’t Capitalize The “W” In ...
Amid Black Lives Matter protests and a reckoning against racism in the United States, the Washington Post is joining other news organizations, including th
by Britni de la Cretaz
News
The Hyde Amendment Hurts Black & Brown Women The Most — & We Need...
This op-ed was written by U.S. Representatives Barbara Lee (California), Alexandria Ocasio-Cortez (New York), Ayanna Pressley (Massachusetts), and Jan Scha
by Ayanna Pressley
US News
Federal Agents Are Finally Leaving Portland — But They’re B...
Oregon Gov. Kate Brown’s office announced on Wednesday morning that the U.S. government will begin a “phased withdrawal” of federal agent
by Britni de la Cretaz
Discover
R29 Stories & News
Watch
R29 Original Series & Films
Shop
R29's Most Wanted