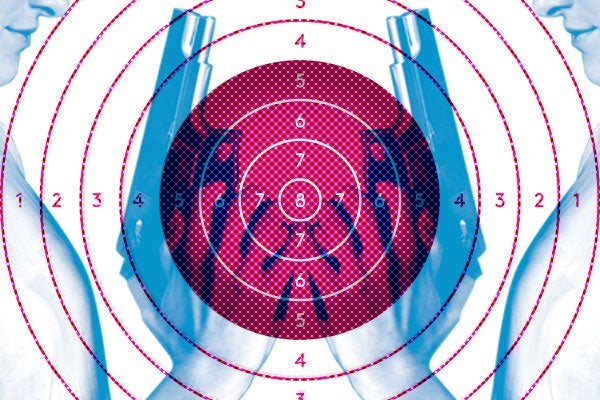 It's understandable that, today, we think of gun control as a divisive political issue above all else. After all, in the last 12 months alone, the United States has seen a number of shootings in public places resulting in multiple deaths and injuries — some widely publicized like the events in Newtown, Connecticut and Aurora, Colorado; others less so, but no less harrowing.
In the wake of December's Sandy Hook shootings, President Obama announced a firm plan of action for strengthening and expanding current gun-control legislation, including mandating background checks, further banning of assault weapons, and limiting ammunition sales. And, as we all know too well, this is undoubtedly one of the most partisan issues of our time (and given today's political climate, that's saying quite a lot).
Advertisement
But, as with most hot-button issues, it's easy to focus in on pundits and policy, and forget the actual people involved. At R29, living and working where we do, we're exposed quite frequently — almost daily, it seems — to tragic tales of gun violence that, many would suggest, could have been prevented with some tighter legislation. We hear stories of children accidentally killing other children with improperly kept firearms. These are compounded by terrifying accounts of unchecked mental illness combined with dangerous access to assault weapons, not to mention crimes and accidents that go mostly unnoticed in a city as big as NYC. The combination of more mass crimes and sensational headlines leads us to believe that, even with a 39% drop in gun crimes between 1993 and 2011, fewer handguns would mean less senseless violence.
But, what about the other side? What about the people — specifically the women — who disagree, and want their guns for myriad reasons, ranging from self-defense to respect among their peers? Curious to know more, we decided to do some digging and look beyond the stereotypes of the typical Southern, male, camo-wearing gun nut. Read on for their stories and opinions. But be forewarned: What we've found only complicates the issue.
Exactly how many women own guns in America depends on your source; while the NRA says it's some 30 million, other estimates put it at half that. Many more women, it's safe to assume, don't personally own guns but use them at a range, or live in a home where a variety of guns are present. We began our search by talking to some female friends and acquaintances who own guns, use them safely, and stand by their right to do so. First up, Rose Cassard, an engineer living in Arizona, who first bought a gun because her boyfriend had a passion for the sport, but eventually gained "an appreciation for the sport of marksmanship and enjoyed the challenge of target shooting." She eventually purchased a .40 caliber pistol, and though she has since sold it, says she plans to buy a 9mm Glock pistol when prices (currently sky-high) come down. "After being around gun enthusiasts for a couple hours," she says, "I realized that there are definitely people who fit into stereotypes, but there are also people like my boyfriend who are well educated and very safe and smart about their guns." And, after regularly visiting the range with her boyfriend for some time, Cassard says she "began to recognize the benefits from a personal-safety standpoint.... It's not that I feel vulnerable or paranoid without a gun, but I feel much more confident and safe when I do carry one."
Advertisement

For Cassard, the politics of gun ownership are far removed from her own experience. Though she defines herself as "fairly neutral" on the issue, she calls more rigorous background checks a "no-brainer." She also acknowledges — and though it might not sound pretty, we think it rings true given the way gender roles are constructed in American society — that for women, "owning a gun tends to be more about safety (or in some cases fashion) and personal protection than anything else. I think it is a less natural thing for a woman to own a gun because we are not typically in the 'protector' role." And, while she does feel "somewhat abnormal" as a woman with a gun, she also sees herself as "ahead of the curve, like I'm taking positive, proactive steps to protect against potentially harmful situations."

But ultimately, it's the sport (target shooting, not hunting, in her case) that draws Cassard to firearms. Indeed, while self-defense was a recurring theme in many of our conversations — and it's probably the more talked-about piece of the issue in media and politics— we found that recreational gun use was the most common theme among the women we spoke with. That was certainly the case with Porochista Khakpour, who despite being date-raped, mugged, and assaulted on multiple occasions, eventually came to love guns for similar reasons. Even though she has since become outspoken against guns (which she wrote beautifully about in this piece for Slate), she says she still misses shooting as a sport. As for self-defense, "well, it became part of my justification. Because most of my fellow liberal friends were not into guns," she explains. "So, when they'd disapprove, I'd dive into the self-defense issue. And then they'd be more sympathetic. So, it might have been a factor, but it wasn't the whole story."
Advertisement 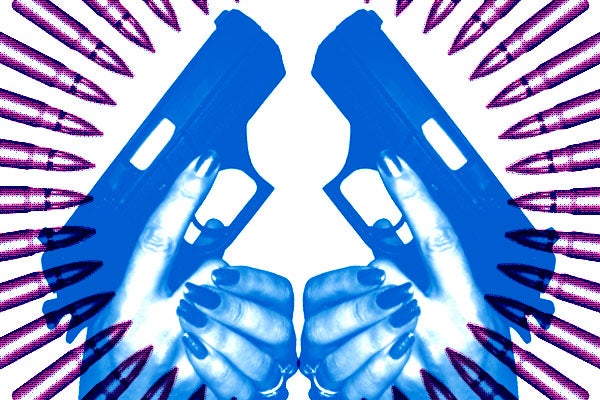