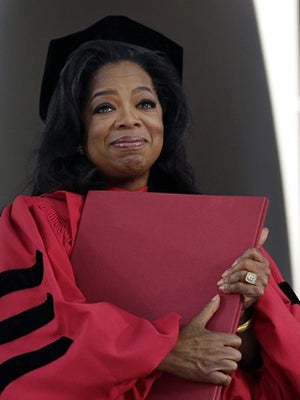 Some people are saying the results of Forbes' 2013 Most Powerful Celebrities list is proof we should never have doubted Oprah. But we beg to differ, mainly because we would never, ever dare to doubt her in the first place. She's built empire upon empire and is currently, according to Forbes, the world's only African-American billionaire. We've got nothing but respect.
Moving on, O regained the number-one spot after two years in second place, topping a very female-friendly list of the most influential (not to mention insanely wealthy) famous faces in the world right now. She's joined by Lady Gaga, who made $80 million in 2012 despite (or possibly because of?) being out of commission due to a hip injury for a good part of the year. Bey, Madonna, Taylor Swift, and Ellen DeGeneres all help round off the top ten. And as for the boys, Bieber, Roger Federer, Steven Spielberg, and Bon Jovi also nabbed prestigious spots on the list.
Advertisement
Aside from our joy at seeing so many women mentioned, one thing we find particularly compelling here is the implication for a growing trend in media and magazine publishing. Even top-tier titles like Vogue, which once relied almost entirely on Hollywood's leading ladies for sales, are seeing a fairly dramatic trend in favor of TV and music personalities. While two top-sellers, Miley Cyrus (not listed) and Kim Kardashian (coming in at 66), didn't gain top spots, the list as a whole certainly seems to lean in that direction, at least for women.
Click over to Forbes for the full run-down, including the net worth of everyone from Leonardo DiCaprio to Emma Stone. But, be prepared to have a rage attack when you realize Jennifer Lawrence is only at number 49. (Forbes)

Advertisement
Entertainment News
Quibi CEO Meg Whitman: Advice To My 26-Year-Old Self
Meg Whitman is the CEO of Quibi, a mobile-only media technology platform bringing together the best of Silicon Valley and Hollywood. Headquartered in Los A
by Meg Whitman
Entertainment News
Tekashi 6ix9ine Granted Early Release From Prison Amid Coronaviru...
Daniel Hernandez, better known as rapper Tekashi 6ix9ine, was released from prison several months early in light of growing concerns over the coronavirus p
by Lydia Wang
Entertainment
It’s A Girl For Katy Perry & Orlando Bloom
A month after announcing her pregnancy, Katy Perry has more news: she and Orlando Bloom are expecting a daughter.  Though this declaration didn’t co
by Lydia Wang
Entertainment News
Logan Williams, Actor On The Flash, Dies At 16
Flash actor Logan Williams has died, People confirmed on Friday. He was 16. No cause of death has been released.  Williams portrayed a young Barry All
by Kaitlin Reilly
Entertainment News
Spain’s Red Princess, A Champion Of Women’s Rights & ...
The first royal has passed away as a result of coronavirus. Princess Maria Teresa de Borbón-Parma of Spain is the first member of a royal family to pass a
by Sarah Midkiff
Entertainment News
The Bachelor’s Ben Higgins Is Engaged Once Again
Almost three years after breaking off his engagement with Lauren Bushnell, The Bachelor’s Ben Higgins has announced a new engagement. After spending some
by Becca Rose
Entertainment
Lori Loughlin Seeks Dismissal Of College Bribery Case Over “...
Following claims that the FBI pressured “Operation Varsity Blues” ringleader William “Rick” Singer into lying about Lori Loughlin and Mossimo Giann
by Ineye Komonibo
Entertainment News
Vanessa Bryant Condemns First Responders Who Allegedly Shared Pho...
On Sunday morning, Vanessa Bryant posted an official statement on her Instagram condemning the alleged behavior of first responders who are rumored to have
by Moná Thomas
Entertainment
Where Are Gabriel Fernandez’s Guardians Now?
In the new Netflix true crime docu-series The Trials of Gabriel Fernandez, director Brian Knappenberger explores the devastating murder of eight-year-old G
by Ineye Komonibo
Entertainment News
Bachelorette‘s Chad Johnson Explains Arrest For Robb...
In a new Instagram video, former Bachelorette contestant Chad Johnson shared his side of the story on his recent arrest for robbery. Johnson talked directl
by Kaitlin Reilly
Entertainment News
Alyssa Milano: The Next Phase of the #MeToo Movement? Justice
Harvey Weinstein is a rapist. Not “alleged.” Not “accused of sexual misconduct.” Not “some women claim.” Weinstein walked into a Manhattan cour
by Alyssa Milano
Entertainment
“Mercy” Singer Duffy Says She Left Limelight After Be...
After an extended hiatus of over a decade, Welsh singer Duffy (real name Aimee Duffy) is explaining why she has been out of the public eye for so long. In
by Ineye Komonibo
Discover
R29 Stories & News
Watch
R29 Original Series & Films
Shop
R29's Most Wanted