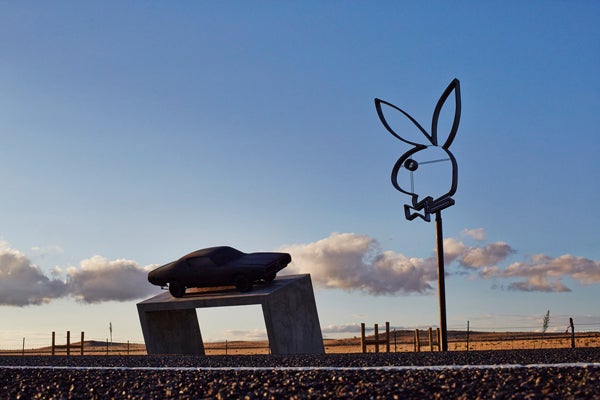 The Prada store in Marfa has a new neighbor over in the badlands of Texas: A giant neon-white Playboy bunny sign. The installation hovers over a matte black 1972 Dodge Charger resting on the surface of a concrete plinth. The project is the first in a series of installations the Playboy brand has unofficially dubbed "Playboy Marfa." Under the creative direction of Neville Wakefield, they've enlisted cult-artist Richard Phillips to spearhead the project and create a vision that'll appeal to a younger generation of Playboy readers.

And essentially, Playboy is looking back in order to look forward; seeking to re-brand themselves as the quintessential cultural magazine that it once was. The illuminated bunny head serves as a kind of north star in the West Texas desert. "That Playboy emblem is a beacon, a touchstone where all these different aspects of our lives — art, politics, sex — come together without contradiction,” Richard Phillips said to
The New York Times
. It's a bold brand push, but a move in the right direction. They could have easily created an oversized neon playmate, which would have been taking the easy way out. Sure, the nude centerfold is recognizable, but it's a mere facet of their brand that's become its synecdoche. Consequently, Playboy's influence in the literary and political worlds has been glanced over, at best.

Advertisement
But, let's not forget that the world got its first taste of Ray Bradbury's Fahrenheit 451 in 1954 in the pages of Playboy, and now the book is a staple of middle school english curriculums. The philosopher Marshall McLuhan was a columnist, and Asa Baber helped shatter the taboo of men opening up about their issues. That's why the bunny head represents so much more than sex. Phillips' decision to place an iconic American car on top of a cement sculpture, whose non-perpendicular relationship to the ground gives the impression that it's toppling over, strips the piece of its hyper-masculinity. All the while, the bunny head glows, ominously assuring Marfa and its vistors that the brand is still strong.
With all of that said, whether it's art or one big advertisement is up for debate, so have at it in the comments.

GG Good Game
Use Fashion Psychology To Hack Your Black Friday Shopping
If you are a person with internet access, an email address, and a credit card, chances are your inbox is overflowing with emails from brands boasting all k
by Patricia Karounos
Entertainment
In Netflix’s Wednesday, Enid Sinclair Is The Perfect...
Spoilers ahead. Wednesday is all about lessons. Both the Netflix series, and the titular main character, are ripe with learnings, but because this isn’t
by Katherine Singh
Pop Culture
Kelly Rowland Defended Chris Brown At The AMAs & People Aren’t Ha...
Last night’s American Music Awards officially kicked off music awards season, giving us a good idea of what might play out come February when the Grammy
by Ineye Komonibo
Advertisement
Somos Latinx
With Namor, Wakanda Forever Does What Latine Media Will Not
Tenoch Huerta Mejía is soaring. Since starring in the superhero epic Black Panther: Wakanda Forever, the Mexican actor has been trending for dancing with
by Dash Harris
Unbothered
Reasonable Doubt’s Messy Chaos Is Its Charm
When Reasonable Doubt premiered on Hulu in late September, viewers were immediately sucked into the sizzling legal drama hinged on the many exploits of sta
by Ineye Komonibo
Unbothered
This Black Panther: Wakanda Forever Twist Is Dividing Th...
This story contains major spoilers for Black Panther: Wakanda Forever. I cry a lot. Bursting into tears from even the slightest bit of emotion on screen (d
by Kathleen Newman-B...
Unbothered
Unpacking The Hurt – And Healing – Of Black Panther: Wakanda F...
This story contains major spoilers for Black Panther: Wakanda Forever and interviews with the cast. Black Panther: Wakanda Forever picks up years after the
by Ineye Komonibo
Somos Latinx
Jenna Ortega Says Latines Carry the Horror Genre & Now It’s...
Jenna Ortega is only 20 years old, but in many ways she feels as grown as her older colleagues. Whether she’s discussing family life or growing up in
by Alicia Ramírez
Unbothered
Ruth E. Carter On The Evolution of Shuri’s Style In Black Pant...
It has been four years since we last visited Wakanda and saw each tribe of the fictional African country brought to life through immaculate costumes and vi
by Venesa Coger
GG Good Game
Digital Fashion Helps You Be Your Most Fantastical Self
There are two types of people in this world: those who like gaming and those who like fashion. Or, at least there used to be. That’s how model, gamer and
by Patricia Karounos
Somos Latinx
What Lopez vs. Lopez Gets Right & Wrong About The Harms of...
Latines love entertainment. For years, we have been the top moviegoers — even though the films we watch rarely reflect our communities. While we represen
by Nicole Froio
Entertainment
Harper & Daphne Are The Most Interesting Part of The White Lot...
In episode 3 of The White Lotus’ second season, Harper Spiller (Aubrey Plaza) realizes she’s underestimated her travel buddy Daphne Sullivan (Meghann F
by Katherine Singh
Advertisement
Advertisement
Discover
R29 Stories & News
Watch
R29 Original Series & Films
Shop
R29's Most Wanted