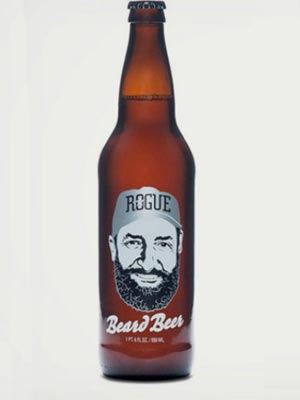 Have you ever wondered why you can't have nice things? It's because of Beard Beer, we have little doubt. And yes, it's exactly what it sounds like. It's beer. Made from yeast. Yeast that was grown in a man's beard. Cue the resounding shudder.
The brewmaster of Rogue Ales, John Maier (only in Portland, obviously), accidentally discovered by way of a joke that his beard, which he has been growing since 1978, is home to a thriving yeast colony just waiting to be used for a new brew. The official company line is this: "Brewers have used wild yeasts in beer making for centuries. John has had the same Old Growth Beard since 1983 and for over 15,000 brews, so it is no great surprise that a natural yeast ideal for brewing was discovered in his beard.” Wild yeasts, yes. But beard yeasts? Yes, it sounds a bit off-putting, but the truth is, it's just beer made with yeast like any other — and of course, any company with even a minimal standard of cleanliness would ensure that no actual beard parts end up in your bottle. It's not like he's sifting each batch through his beard by hand; in fact, reviews even say it tastes pretty good.
Convinced? Okay, then order some, and please, do report back. (The Gloss)

Most Wanted
27 Oddly Specific Advent Calendars You’ll Want To Gift This...
by Karina Hoshikawa
Deals
A Rare Deal On The Cult-Favorite Always Pan
Super Sale Alert: Score the Always Pan for $30 off from now until October 18! No promo code required. Unlike other popular cookware brands, the Always Pan
by Alexandra Polk
Most Wanted
The Japanese Snack Subscription Box That Gives Me A Taste Of Home
As sad as it is to admit, I used to feel that being Japanese made me kind of uncool. My go-to lunches of (delicious) grilled salmon bentos and (also delici
by Karina Hoshikawa
Advertisement
Best Coffee
14 Black-Owned Coffee Brands To Shop On National Coffee Day
by Olivia Harrison
Most Wanted
The Best Coffee Subscription Boxes For Stocking Your Kitchen-Cafe
After nearly two years (woah) of living, working, and existing almost entirely at home, it’s fair to say we added a few new tricks up the sleeves of
by Amanda Randone
Food & Drinks
These Climate-Friendly Crackers Made Me Put Down My Cheez-Its For...
read on to hear what makes these crackers taste better than my standby Cheez-its — and why Collins chose to fight climate change via delicious simple sna
by Alexandra Polk
Food & Drinks
Sakara Life Review: What It’s Really Like To Eat It For 5 Days
Let’s face it: cooking healthy meals at the end of a long work-from-home day (in the current state of the world) is at the bottom of our likely-to-do
by Cortne Bonilla
Most Wanted
The $30 Amazon Cold Brew Maker That Breaks Even In Two Months
Although I’m more of a tea enthusiast than a coffee devotee, I cannot resist the siren song of cold brew. Unfortunately, the delicious morning elixir
by Karina Hoshikawa
Living
We Have A Lot Of Questions About Black Irish, Mariah Carey’...
Once upon a time, there were the Lady Gaga Oreos; even more recently, there was the Saweetie meal. Now, Mariah Carey — who blessed us last December with
by Lydia Wang
Food & Drinks
American Cheese Is Good, Actually
Once again, it’s become popular for people to rag on American cheese. I’m sick of it, and feel like it needs to be said that American cheese is delicio
by Mirel Zaman
TikTok
This Frozen Honey TikTok Trend Isn’t Exactly Good For You
Thanks to TikTok, we’ve seen a variety of food trends come and go over the last year: homemade pancake cereal, dalgona coffee, and that feta pasta. A
by Asia Ewart
Food News
We Have A Lot Of Questions About Jennifer Aniston Eating One M&M ...
There is snacking in moderation; there is savoring food. And then, there is whatever Jennifer Aniston likes to do with chips and M&Ms. In a new InStyle
by Lydia Wang
Advertisement
Advertisement
Discover
R29 Stories & News
Watch
R29 Original Series & Films
Shop
R29's Most Wanted