Skip navigation!
Story from Los Angeles
With more women joining the billionaires club, the glass ceiling women face in the working world is slowly cracking, but no matter how much that ceiling cracks, the underlying sexism within the industries — even in the arts — is still prevalent.
A study released last January, which corresponded with the Sundance Film Festival, revealed 4.4% of the top 100 movies each year from 2002 - 2012 were directed by women. A whopping 40% of the women polled said "male-dominated networking" was their biggest challenge. Bleak numbers were only to be made bleaker by Amy Pascal, a co-chair of Sony Pictures Entertainment, who, in an interview with Forbes last week, said, "For a woman to direct a movie in Hollywood, she has to go through so many layers of rejection by the powers that be...I think that the whole system is geared for them to fail."
Advertisement
Sadly, sexism in Hollywood isn't a surprise, but when it comes to the gory world traditionally geared towards men, the horror isn't just in the genre. Studies have shown that nearly half of the scary-flick goers are women, and most horror films are centered around women. But, Complex notes that for every one female horror director at a convention, there are dozens and dozens of male ones. Finding positive female director role models is difficult for an aspiring girl director, but fortunately pro-female conventions like Women In Horror Month and Viscera Film Festival are helping to spotlight them.
Jen and Sylvia Soska, a.k.a The Twisted Twins, are working to counter Pascal's beliefs. With their film, American Mary, they've garnered the praises of the top male horror directors in the field. "They look at it as not male and female, but as, 'Here's a cool genre that we love," says American Mary's producer John Curtis. "They're filmmakers first, I think, and females second. And they want other women to feel the same way about themselves." We couldn't have said it better, John. It's a slow uphill battle to climb, but if we girls stick together, follow the Twisted Twins advice in their awesome Complex interview (and maybe form an army like Bey's) we could show the boys how to really throw blood and guts like a girl. (Complex) 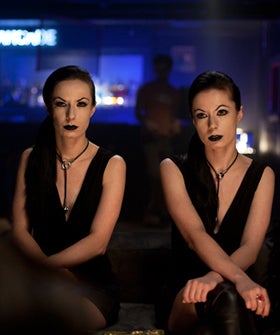 Advertisement
TV Shows
All The Singers Left On The Masked Singer Season 3
by Leah Marilla Thomas
TV Shows
The Celeb Behind The Kitty On The Masked Singer Might Be F...
The second group of contestants on the Masked Singer is stacked with secret celebs who consistently deliver nearly pitch perfect performances and choreogra
by Ariana Brockington
TV Shows
The Masked Singer’s Taco Has Probably Been To Infini...
What would we do without The Masked Singer? It is the only show on television where you can watch a grown man dressed as a taco effortlessly, confidently,
by Ariana Brockington
Entertainment
John Mulaney Uncovers Pete Davidson’s Secret Life On Sat...
Will the real Pete Davidson, please stand up? In a new promo for Saturday Night Live starring guest host John Mulaney, Davidson — who recently took a swi
by Kaitlin Reilly
TV Shows
Everyone Who’s Been Unmasked On The Masked Singer Se...
by Ariana Brockington
Entertainment News
Bachelorette‘s Chad Johnson Explains Arrest For Robb...
In a new Instagram video, Chad Johnson shared his side of the story on his recent arrest for robbery. Johnson talked directly to the camera in the video as
by Kaitlin Reilly
TV Shows
All The Celebrities Who’ve Been On The Masked Singer...
by Ariana Brockington
Best of Netflix
Altered Carbon Season 2 Is John Wick “Gun Fu” — & More S...
A small squad of gun-toting imperial fighters marches through a Vancouver soundstage. The light-up red eyes on their helmets shine through the pitch black
by Ariana Romero
Music
There’s Already A Wild Theory About Taylor Swift’s “The Man...
Taylor Swift has reinvented herself through several different eras of music, but it seems like there’s one common denominator: Kanye West. His infamo
by Kathryn Lindsay
Pop Culture
Prince Harry Just Changed His Name — Sorta
In his effort to transform from a royal famous person to a regular famous person, Prince Harry is making yet another big life change. Prince Harry is now g
by Kaitlin Reilly
TV Shows
The I Am Not Okay With This Soundtrack Is Full Of John Hu...
by Shannon Carlin
Movies
17 Of The Greatest Movie Endings, Ever
by Morgan Baila
Discover
R29 Stories & News
Watch
R29 Original Series & Films
Shop
R29's Most Wanted