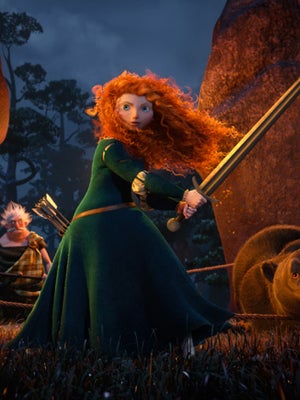 Someone over at Disney must have had Destiny's Child on repeat because it's finally throwing it's hands up for "Independent Women." The brand announced today that Merida, the frizzy red-headed heroine from last year's Oscar winning animated film Brave is getting the princess treatment she deserves. A coronation ceremony will be held at Disney World on May 11 where she'll join the ranks of Belle, Cinderella, and Jasmine and their respective princes as Disney's 11th princess. But don't expect any man to accompany Merida, though. She's the very first heroine to become a "princess" without a prince. Who needs some knight in shining armor when your armor shines just fine on its own, thankyouverymuch.(Crushable)