Skip navigation!
Story from Mens
Weight and the fashion model have been two topics joined at the hip bone for years. Recent Fashion Week cities have set forth bans against allowing too-thin models to walk down its runways. Progress has been made to ensure that healthy food and drinks are provided backstage at shows. And the subject of anorexia and its subsequent relation to the fashion world was slowly beginning to inch its way to our periphery. That is, until, Hedi Slimane sent one particularly gaunt-looking model down Saint Laurent's Paris runway. Here's the kicker. The model was male.
You might be surprised to know that male anorexics (sometimes cheekily called "manorexics") make up 20% of people suffering from eating disorders. Back in September, GQ ran an article following the lives of multiple men who starved themselves for various reasons: Their girlfriends broke up with them; they needed to meet a goal weight; they wanted to look like so-and-so — the reasons go on and on. Sound familiar? Like their female counterparts, male anorexics feel the influence of the fashion, music, and entertainment world to look a certain way. It's not the fashion world's fault necessarily, but it does "have a powerful influence that is highly toxic to some vulnerable people," according to ED awareness organization B-EAT spokesperson Leanne Thorndyke.
Advertisement
The male anorexic is still largely misunderstood. The number of treatment facilities available is limited, not in the least bit due to the stigma that only women live with the disorder. Often men will actually be denied from a rehab facility because the male gaze is considered to be one of the biggest roots of female anorexia. With Slimane's decision to cast this model, the question here isn't so much "why is he so thin?" or "should he be allowed to walk?" — rather, it's a question of how male models have been largely left out of fashion's increasingly present discussion of weight and body image. (The Daily Mail) 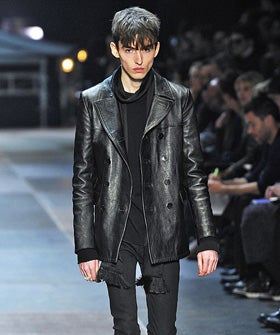 Image via The Daily Mail

Celebrity Style
Timothée Chalamet’s Fan-Made T-Shirt Is The Real Star Of His Rece...
At this point, meeting someone who isn’t obsessed with Timothée Chalamet and his ever-changing style is rare. But only a select few of his fans go the e
by Eliza Huber
Best Men's Gifts
Small Gifts For Men That He’ll Happily Receive Via Stocking
by Lourdes Avila Uribe
Shopping
The Best Gifts For Each & Every Man In Your Life
by Ray Lowe
Fashion
30 Gifts For Men That Won’t Lead To A Breakup
Here's to another year together!
by Christina Holevas
Mens
Mario Testino Is Accused Of Sexual Misconduct
Celebrity and fashion photographer Mario Testino is accused of sexual harassment and assault by several male models and three photo assistants, according t
by Meagan Fredette
Fashion
The Instagram Shop That Sells Heels — For Men
Down the sidewalks of Bushwick, Brooklyn, strut Henry Bae and Shaobo Han, the founders of Syro, an Instagram shop that makes heels for men. The thing is, y
by Landon Peoples
Fashion
If Men In Heels "Freak You Out," Then You're Part Of The Problem
I remember the first time I wore heels. Of course I do. And I remember the first time I fell out of them, too. It was a pair of sandal wedges — Mudd, I b
by Landon Peoples
Fashion
Michelle Obama Reveals Barack Is (Gasp!) An Outfit-Repeater
It's hard to believe we missed this one.
by Sarah Midkiff
Fashion
Maison Margiela Invites You To Scribble On Its $500 Sneakers
The sneakers are available now at End Clothing and according to the website, they also come with a “branded marker pen.”
by Marquita Harris
Fashion
This Kickstarter Wants To Make Rompers For Men A Thing
It already met its goal on the crowdfunding site.
by Ana Colon
Mens
30+ Gifts For Guys That Will Make Your Man Feel All The ...
by Landon Peoples
Mens
Why This ASOS Launch Is A Very Big Deal
If you thought the shopping clickhole that is ASOS already had it all, prepare to have your mind blown. While the site is probably the only place you can g
by Christopher Luu
Discover
R29 Stories & News
Watch
R29 Original Series & Films
Shop
R29's Most Wanted