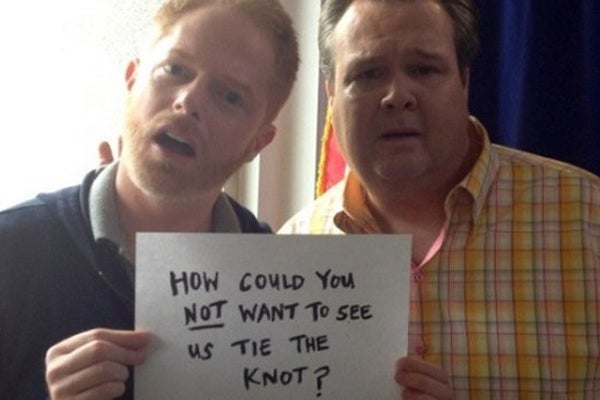 Things are getting tense as Illinois prepares to vote on same-sex marriage, and though many have stepped up to the plate as advocates for gay rights, we're psyched to see that Modern Family star Jesse Tyler Ferguson has become a strong voice for the cause. Jesse and co-star Eric Stonestreet dabbled in the debate along with show producer Steven Levitan (who famously offered Ann Romney the chance to officiate Cam and Mitchell's wedding "once it's legal"). Today, the star is launching a "Bow Tie Lobby Day" in Springfield, Illinois, using the bow tie as a symbol for tying the knot — that clever fox.
Modern Family's already breaking boundaries with its realistic representation of families, so it's only appropriate our favorite red-headed funnyman take a satorial stand for civility. We've got our fingers crossed as we cheer on Jesse and all those supporting gay marriage in Illinois today. Not sure how to rock a bow tie? We've got you covered. (HuffPost)