Skip navigation!
Story from Beauty
When you were a teenager, the stud piercing in your right nostril was probably inspired by The Craft — and, if we're being honest, a way to piss off your parents. Then, maybe you moved on to a septum piercing after spotting it on cool-girl celebs like Zoë Kravitz and FKA Twigs. But even though nose piercings are experiencing a resurgence now, they've been around for thousands of years and hold special significance in many cultures. And while a piercing — in an area prone to mucus — might seem intimidating, it's actually one of the easiest areas to clean and care for, according to pros.
Advertisement
Although the official healing time is close to three months, taking care of a nose piercing is relatively low lift compared to other piercings. Whether you have a hoop or a tiny stud, the majority of the jewellery is inside the nose's mucous membrane — an area of the body that naturally clears out bacteria to prevent infections.
But even though your body does the majority of the grunt work, you should still prescribe to a regular cleansing routine for the part of the piercing that's outside of the nasal cavity. Brian Keith Thompson, L.A. celebrity piercer and owner of Body Electric, explains that using a mild soap on the small strip of skin between the ring for septum piercings or on the outside of your nostril for studs is the easiest way to avoid infection. 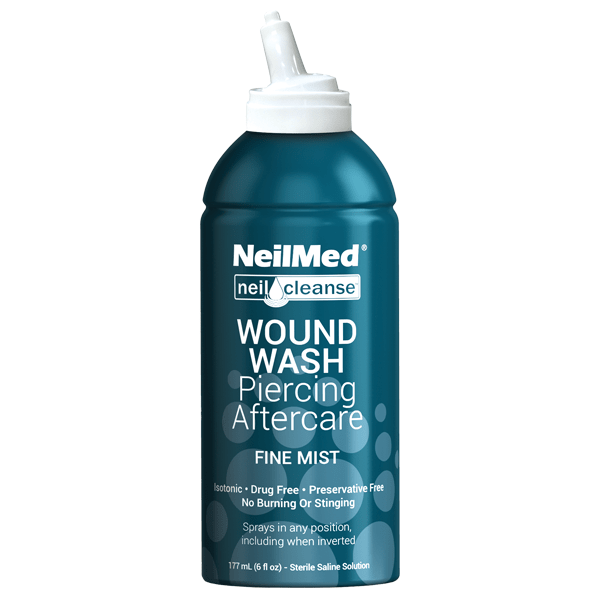 NeilMed
Sterile Saline Piercing Aftercare
£15.00
Isha Body Jewellery
Cetaphil
Gentle Skin Cleanser
£7.49
Boots
dr bronner's
Organic Baby Mild Castile Liquid Soap
£7.69
Ocado
But you don't need to move or twist the jewellery as you clean. Just gently massage a pea-sized amount of a fragrance-free cleanser (Thompson's a fan of Dr. Bronner's soap) on the area of the new hole. When you're done, pat the skin dry with a paper towel (skip using a regular wash cloth in case it snags the jewellery and causes irritation) and finish with a spritz of saline solution. You should complete this entire routine once or twice a day, depending on how often you touch your nose. Thompson adds that while you might not need to clean the inside of the nose with soap, you can use a saline product with a fine-mist tip to keep the cavity hydrated (especially during the winter).
You'll notice that this step-by-step doesn't include any alcohol. Dermatologist Rachel Nazarian, FAAD, MD, tells us that while alcohol is known for keeping wounds clean, it's not the best solution for a piercing. Not only is it too drying, but it can lead to inflammation — which will most likely lengthen your healing process. And nobody wants that, right?
Got a question about your body piercing? Leave us a comment below!
Advertisement
Related Stories
Everything You Want To Know About Nipple Piercings
How To Get Rid Of Your Nose Piercing Bump
Is Your Piercing Really Infected?
Beauty
The Invaluable Piece Of Advice A Dermatologist Gave Me For My Acne
I know I’m not alone when I say I’ve suffered with acne-prone skin for pretty much all of my adult life. Over the years I’ve managed to get things ge
by Lucy Partington
Beauty
Tranexamic Acid Tackles Pigmentation & Dark Spots, Fast
From niacinamide to azelaic acid, there are countless buzzy skincare ingredients bursting onto the beauty scene. Right now, it seems everyone is talking ab
by Jacqueline Kilikita
Beauty
What London’s Most Genuine Beauty Expert Wants You To Know About ...
Alicia Lartey‘s forte is skincare but her defining characteristic is brutal honesty. The scientist and aesthetician has carved a niche for herself on
by Jacqueline Kilikita
Advertisement
Beauty
The Ordinary’s Best Acne Product Is Back & It’s Bette...
Not long ago, if you were to ask any skincare enthusiast to share their top products for treating breakouts, The Ordinary’s Salicylic Acid 2% Solutio
by Jacqueline Kilikita
Beauty
How to Get Plump & Delicious Skin, According to Glow Expert Nam Vo
Makeup artist Nam Vo doesn’t really wear much makeup at all. Her aesthetic is, and always has been, really glowy skin — she calls it her “dew
by Megan Decker
Beauty
Will Drinking More Water Transform Your Skin? The Answer May Surp...
Dear Daniela, How important is it to drink water for your skin? I constantly hear beauty influencers and celebrities saying that water is their ultimate be
by Daniela Morosini
Beauty
The Rise & Fall Of Skincare’s Most Controversial Beauty Pro...
Not too long ago you could ask any skincare expert which product or ingredient they’d recommend for glowing skin and nine times out of 10 their answe
by Jacqueline Kilikita
Beauty
This £9.99 Moisturiser Transformed My Skin (& Other Editors Are S...
If you were to take a look inside my bathroom cabinet, you’d find tens of half-used beauty products that are nice enough but not so impressive that I
by Jacqueline Kilikita
Beauty
Face Theory Is Just As Impressive As The Ordinary (& Affordable, ...
There are a handful of cult skincare brands you’re likely to spot when scouring #shelfies belonging to beauty influencers, dermatologists and makeup
by Jacqueline Kilikita
Beauty
A Dermatologist Told Me To Use This Ingredient For Healthy, Glowi...
One exciting thing about my job as a beauty editor is sitting down with the skincare industry’s most respected experts to uncover game-changing skinc
by Jacqueline Kilikita
Beauty
Meet No. 1 De Chanel, The Brand’s First Sustainable Beauty ...
On Wednesday, the French luxury house launched No. 1 de Chanel, its first foray into the ever-growing — and ever-imperative — eco-conscious skincare an
by Sara Tan
Beauty In A Tik
TikTok’s Smooth Skin Hack Works So Well, I’ve Put Awa...
Welcome to Beauty In A Tik, where each week we put TikTok’s viral beauty hacks and innovative trends to the test. Another year, another avalanche of
by Jacqueline Kilikita
Advertisement
Advertisement