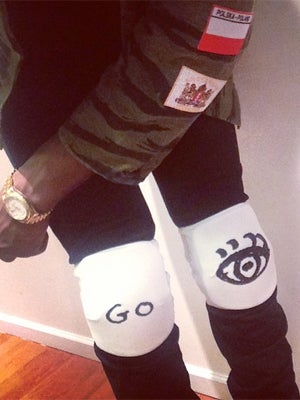 When we told you about Yoko Ono's collection of light-up bras and other provocative, crazy-pants menswear items for Opening Ceremony last month, we wondered to ourselves about exactly what sort of gentleman would sport the pieces. Prince on laundry day, perhaps? Maybe a very sexually liberated mime? We couldn't be sure.
Well, now we've got our answer. Theophilus London — a musician who combines Prince's flash with the grit of an unwashed sidewalk — received a pair of Ono's Printed Eyes and Printed Stop & Go knee pads for Christmas. Apparently, he was so pleased with the gift, he Instagrammed this photo (though the image has since been removed). Granted, it's not like he's going all out and wearing this, but it is still proof that, yes, Ono's designs are not only charming, they're actually wearable. Fair warning to men and the women that dress them though, wearing any of Ono's menswear may actually require a successful recording career. (Complex)

Best Men's Gifts
Small Gifts For Men That He’ll Happily Receive Via Stocking
by Lourdes Avila Uribe
Celebrity Style
Timothée Chalamet’s Fan-Made T-Shirt Is The Real Star Of His Rece...
At this point, meeting someone who isn’t obsessed with Timothée Chalamet and his ever-changing style is rare. But only a select few of his fans go the e
by Eliza Huber
Shopping
The Best Gifts For Each & Every Man In Your Life
by Ray Lowe
Advertisement
Fashion
30 Gifts For Men That Won’t Lead To A Breakup
Here's to another year together!
by Christina Holevas
Mens
Mario Testino Is Accused Of Sexual Misconduct
Celebrity and fashion photographer Mario Testino is accused of sexual harassment and assault by several male models and three photo assistants, according t
by Meagan Fredette
Fashion
The Instagram Shop That Sells Heels — For Men
Down the sidewalks of Bushwick, Brooklyn, strut Henry Bae and Shaobo Han, the founders of Syro, an Instagram shop that makes heels for men. The thing is, y
by Landon Peoples
Fashion
If Men In Heels "Freak You Out," Then You're Part Of The Problem
I remember the first time I wore heels. Of course I do. And I remember the first time I fell out of them, too. It was a pair of sandal wedges — Mudd, I b
by Landon Peoples
Fashion
Michelle Obama Reveals Barack Is (Gasp!) An Outfit-Repeater
It's hard to believe we missed this one.
by Sarah Midkiff
Fashion
Maison Margiela Invites You To Scribble On Its $500 Sneakers
The sneakers are available now at End Clothing and according to the website, they also come with a “branded marker pen.”
by Marquita Harris
Fashion
This Kickstarter Wants To Make Rompers For Men A Thing
It already met its goal on the crowdfunding site.
by Ana Colon
Mens
30+ Gifts For Guys That Will Make Your Man Feel All The ...
by Landon Peoples
Mens
Why This ASOS Launch Is A Very Big Deal
If you thought the shopping clickhole that is ASOS already had it all, prepare to have your mind blown. While the site is probably the only place you can g
by Christopher Luu
Advertisement
Advertisement
Discover
R29 Stories & News
Watch
R29 Original Series & Films
Shop
R29's Most Wanted