Skip navigation!
Story from Beauty
While nail art has now become part of a standard beauty routine for many women, the fingertip phenomenon may never have made it into the rotation if not for WAH Nails. Three years ago, after Sharmadean Reid was denied the Dior double French mani she had requested, she decided to open her own London-based salon where you could have "whatever you wanted" on your nails. Whether you're getting the F-bomb graffitied on your tips or ten little Louboutins as your mani, WAH Nails is up for the challenge. Famous nail artists, including Sophy Robson, have been singing their praises since they opened, and we're just as obsessed. The only bummer? If you're nutty for avant-garde nails, you'll have to head across the pond — they only have locations in the UK.
Advertisement
But could a WAH Nails NYC be on the horizon? The salon's launch of their new book, The WAH Nails Book of Nail Art, is bringing them to New York for the first time. WAH Nails will be hosting a pop-up nail bar at W Union Square, this Thursday, April 19, but it is exclusive to hotel guests. We're hoping that this is a step toward funkier fingers in the city, and we can hardly keep from biting our nails in anticipation. (BeautyHigh) 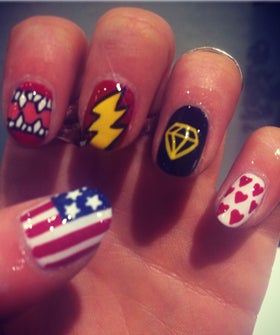