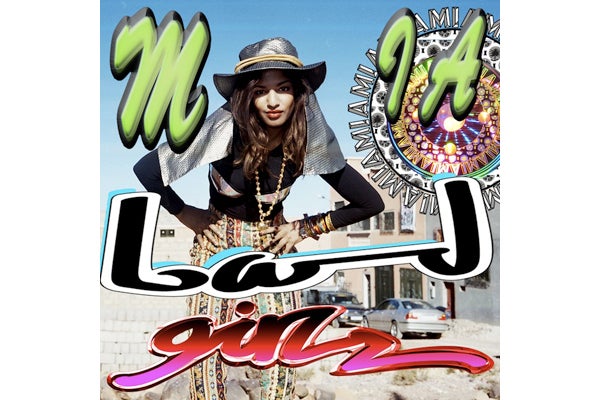 It seems almost superflous for “Bad Girls” to be released as the first single for M.I.A.’s untitled upcoming album — not because the song isn’t great, but because many of us have been listening to a slightly truncated version of the track for over year on her excellent Vicki Leekx mixtape.
For those that missed out the first time around, “Bad Girls” sees M.I.A. returning to form, forgoing the grating noise and overall unpleasantness that defined her last album, ///Y/. With what will surely be a relief for some fans, “Bad Girls” disregards any notions of the political in favor of a catchy, somewhat meaningless refrain: “Live fast, die young / Bad girls do it well” sings Maya. Sure, why not. The true success of “Bad Girls” can be credited largely to production from Timbaland protegé Danja, whose cocktail of slinky pop owes a thing or two to Diplo’s past success with M.I.A.. Ultimately, it’s a single strong enough to warrant the re-release, and there’s something to be said for not having to fast forward to 14:55 to hear the track. Let’s hope M.I.A.’s new album lives up. (Pitchfork)
Advertisement

TV & Netflix
S3 Of Never Have I Ever Explores What It’s Like To Have A ...
Spoilers ahead. To be fair, the relationship between Never Have I Ever heroine Devi Vishwakumar and new boyfriend Nirdesh (or Des, to his friends) was doom
by Katherine Singh
GG Good Game
VR Meditation Has Changed My Life IRL
Right now I’m suspended in the air, high above the ground, as if gripped in an invisible giant’s fist. Strangely I don’t feel scared at all. Leaves d
by Maybelle Morgan
Unbothered
Serena Williams’ Legacy Lives On In Black Girls Like Me
I wasn’t a big sports fan growing up. If someone were to ask me to name five athletes as a kid, my response  would have probably been, “Uhhh, Serena W
by Wisdom Iheanyichukwu
Advertisement
Somos Latinx
Never Have I Ever Star Lee Rodriguez on Portraying Fabiola...
For Afro-Latines, seeing someone on screen who looks like you and also shares your cultural background is still rare. “When there’s not a lot of repres
by Priscilla Rodriguez
Somos Latinx
Cancelling Batgirl Isn’t Just Baffling — It’s A Crus...
When I heard the news in 2021 that Afro-Dominican actor Leslie Grace was cast as Batgirl in the Warner Bros. superhero film of the same name, I was ecstati
by Amanda Alcantara
GG Good Game
Sex In The Metaverse Is Coming — And So Can You
These days, talk of the metaverse is inescapable. We take work meetings and suck up to our bosses in a virtual boardroom, attend couture fashion shows alon
by Katherine Singh
Movies
Jo Koy & Easter Sunday Helped Me Better Understand My Fi...
In case it isn’t clear: Jo Koy really, really loves his mom. The comedian/actor has skyrocketed to fame over the past few years, thanks in large part
by Sara Tan
Movies
The Scariest Part of Bodies, Bodies, Bodies Isn’t the De...
Drunk and high at a rich kid mansion, Bee (Maria Bakalova) tries to make sense of the friends she has just met who have decided to make the most of a hurri
by Claire Hambrick
Unbothered
Brittney Griner Sentenced To 9 Years In Russian Prison For Drug C...
After being detained by Russian police at Sheremetyevo Airport on drug allegations in February, WNBA athlete Brittney Griner has officially been sentenced
by Ineye Komonibo
GG Good Game
Hot Tub Streamer Amouranth Is Using A Bikini To Build An Empire
The idea of people going online to watch NSFW material isn’t anything new. For decades, viewers have been covertly opening incognito tabs on their laptop
by Katherine Singh
Somos Latinx
Melissa Barrera’s Resolve Prepared Her to Survive in the Wilderne...
After wrapping her latest starring role on Netflix’s limited series “Keep Breathing,” Melissa Barrera hasn’t only solidified her spot in Hollywood
by Ashley Garcia Lez...
Somos Latinx
Juliana Joel Made History Playing the First Trans Character on Di...
Even while talking through Zoom with a spotty Internet connection, Juliana Joel’s confidence, charisma, and undeniable charm beams through the screen and
by Olivia Zayas Ryan
Advertisement
Advertisement
Discover
R29 Stories & News
Watch
R29 Original Series & Films
Shop
R29's Most Wanted