Despite Disney’s strict rules prohibiting adults from wearing costume inside its theme parks, die-hard fans have found a creative way around it. 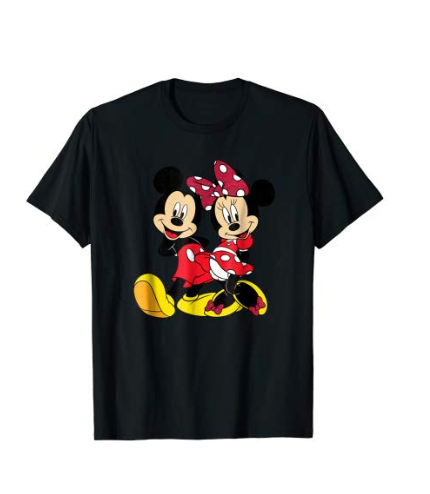 Disney
Disney Mickey And Minnie Big Mouse T-shirt
$19.98
Amazon
Miu Miu
Orange Disney Edition Wool Aristocats Sweater
$1070.00
SSENSE
Swarovski
Mickey & Minnie Bracelet
$79.00
Swarovski
For the happiest place on Earth, Disney can be hugely polarizing.
Many among us believe that the entertainment conglomerate is pure magic. After all, Disney's biggest themes — that dreams should be big, dragons can be slayed, and that everyone deserves their own happily ever afters — are some of humanity's most universal ideals. But for others, it's a scam — consumer culture at its purest, tying real human emotions to an unending river of products to consume, all to profit one of the biggest, most powerful companies on Earth.
Many people swing from wonderstruck to skeptical as they grow up. But certain adults have remained die-hard loyalists. They get married at Disney World, go to work dressed as their favorite characters, and would rather spend their Friday nights playing Disney trivia than camped out at a bar.
Their obsession gave birth to the global phenomenon of Disneybounding. Born out of the theme parks' strict rules that prohibits anyone over the age of 14 from entering in costumes, Disneybounding has exploded in recent years. Thousands of Disneybounders share their outfits on social media every day, and an entire cottage industry of third-party shops cater to their expanding wardrobes and specific tastes. And some have even found a way to turn their hobbies into wildly lucrative careers.
Follow the characters on Instagram:
Sarah Sterling: @sarahsterling
Leo Camacho: @mrleozombie
Tiffany Mink: @tiffmink
Yvette: @disneylandmermaid
Heather Laing: @chuchl
Chelsea Watson: @styledbymagic
Connie Wang: @conconwang
Why Adults Dress Like Disney Characters And How
written by Connie Wang
Fashion • Celebrity Style • The Latest • Style Out There
Released on March 8, 2019
Season 3
Season 2
Season 1
Style Out There: Why Adults Are Disneybounding" — & What It Says About Us
Style Out There: What Sex & Spandex Does For Dancehall Queens In Jamaica
Style Out There: Petticoats, Politics, & The American Women Who Compete In Mexico's National Sport
Style Out There: For Black Women, Afrofuturist Fashion Is More Than A Costume
These Japanese Cholas May Challenge What You Think About Cultural Appropriation
Style Out There
About
Style Out There is Refinery29’s award-winning video series that explores the connections between clothing, community, and culture across the world. In season three, host and journalist Connie Wang digs into the ways clothing has given women a way to speak out, look within, and identify the forces that limit their potential. Through these stories, Wang discovers the powerful way fashion illuminates taboo social and political issues, ranging from the connection between sexy clothing and sexual assault to instances when cultural appropriation can actually be both useful and productive.
Discover
R29 Stories & News
Watch
R29 Original Series & Films
Shop
R29's Most Wanted