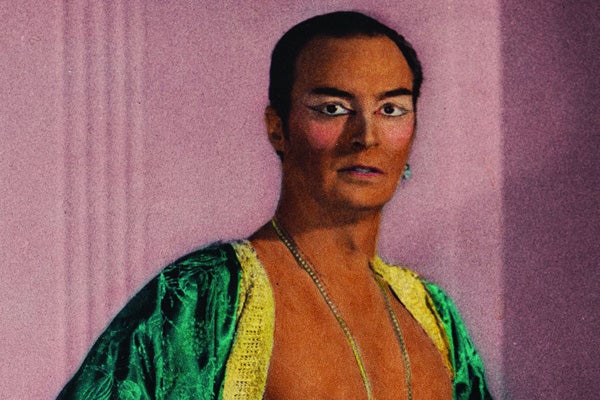 Even in the era of Wikipedia, trying to track down all of Toronto-based art-pop artist Slim Twig’s projects is no easy task. Some of his work includes producing music for Dirty Beaches, acting in a film with Ellen Page, working with Owen Pallett, and collaborating with US Girls (his wife, Meghan Remy). He’s a modern-day Renaissance man, specializing in all forms of the experimental and avant-garde.
In keeping with his other projects, Slim Twig’s new video for “Altered Ego” is as wild and weird as you’d imagine. The clip is an eye-melting visual experience where the costumes of Renata Morales play as much a role as Slim Twig’s music. While the designer has done work with Arcade Fire, Zola Jesus, Grimes, and others, the flowing, impossible-to-describe outfits in “Altered Ego” may be some of her most arresting. The song, too, has its own warped logic, where spastic guitar-squalls coalesce into something resembling pop. If only our last trip to MoMA had been so entertaining.
Advertisement
Slim Twig—Sof’ Sike "Altered Ego"
Altered Ego was directed by George Fok from PHI Create. Costumes were done by Renata Morales who designs for artists such as Arcade Fire, Grimes, and Zola Jesus. The music video was filmed in Montreal's newest multidisciplinary art centre, the PHI Centre.

All music is for sampling purposes only. Please go out and buy the artists' records. If you would like for us to remove a track, please email us at feedback@refinery29.com.
Movies
It’s Time To Talk About The Hot Hook Discourse
Jude Law is in talks to play the villain Captain Hook in Disney’s live-action version of Peter Pan, according to Variety. The upcoming film, titled Peter
by Natalie Morin
Celebrity Couples
Chris Evans & Lily James Are Hanging Out In London — Like, A Lot
After charming his way into our hearts with his good looks and genuine nice guy energy, Chris Evans may have an update on his love life that the world is g
by Ineye Komonibo
Amazon
17 Must-See Movies That Show America As It Actually Is
by Lia Beck
Entertainment
Oprah Winfrey Will Help Bring NYT’s Astonishing 1619 Project To Life
If you missed The New York Times’ striking 1619 Project, which examines the legacy and impact of slavery in America, you’re in luck: the m
by Natalie Morin
Best of Netflix
Everyone Is At Home Watching These 10 Shows & Movies On Netflix R...
by Ineye Komonibo
Amazon
We Finally Know What To Expect In Season 2 Of The Boys & I...
Your favorite band of superheroes are back, and I don’t mean the kindhearted flying folks of the Marvel Cinematic Universe. Amazon’s The Boys i
by Ineye Komonibo
Movie Trailers
Rediscover Hollywood’s Most Famous Nude Scenes With This Ne...
“You read all about her in Playboy Magazine. Now see Jayne Mansfield completely nude!” So read a poster advertising Mansfield’s now-landmark scene in
by Anne Cohen
Entertainment
Technically, Characters In Stateless Are Only Inspir...
by Lia Beck
TV Shows
Gimme Kiss: The Best Kisses On TV
by Ineye Komonibo
TV Shows
The Best Songs From The I May Destroy You Soundtrack So Far
by Natalie Morin
Pop Culture
Wakanda Is Absolutely Not The Place Kanye West Thinks It Is
In case you haven’t heard, Kanye West is running for president — but for real this time. Just days after announcing his intentions to occupy the highes
by Ineye Komonibo
Movies
The Old Guard Director Gina Prince-Bythewood Wants To Sh...
This interview contains mild spoilers for The Old Guard, streaming on Netflix July 10. “I’ve been here before, over and over again. And each time the s
by Anne Cohen
Discover
R29 Stories & News
Watch
R29 Original Series & Films
Shop
R29's Most Wanted