Skip navigation!
Story from Entertainment
We all know the feeling: sitting in your dark, claustrophobic studio, watching Monica and Rachel prance around their palatial West Village pad, and wondering what you've done to anger the gods of apartment fate. Now, there is finally vindication—NYC real estate maven Barbara Corcoran is debunking basically every sitcom that has made us hate our own tiny (yet realistic!) abodes. Take, for example, Carrie Bradshaw's Upper East Side one bedroom; in non-HBO land it would have run her around $2,800 a month, nearly impossible for someone who writes one column a week in a slightly obscure newspaper to afford. And, that doesn't even include the millions of dollars (literally!) that Ms. Bradshaw spent on those famous Manolos.
Advertisement
Corcoran also breaks down the real-life rent of other silver screen digs—including the homes seen in 30 Rock, 2 Broke Girls, and the controversial Girls, to name a few—and they're all unrealistic for the presumed salaries of the fictional residents. The only reasonably priced apartment is that belonging to Mad Men's Don Draper, with his Waverly Place pad going for a paltry $200 a month. But remember, that was in the 1960s, when a six-pack of beer would run you less than a dollar. (Vanity Fair) 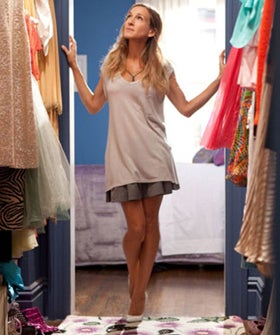