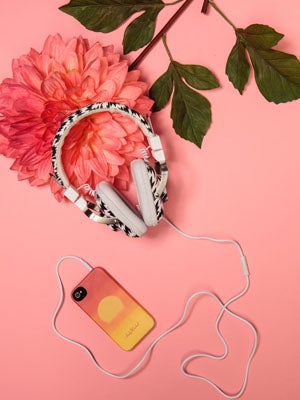 photographed by ingalls photo; set design by marie-yan morvan
You know how it goes: You hear a song and feel all sorts of feelings, evoked by everything from the rhythm and the pace to the lyrics. The same thing can happen when you see a certain color. Think you love blue and gray in your bedroom just because? Not likely. No need for Xanax — they are legit soothing.
University of California, Berkeley, researcher Stephen Palmer recently published a study in Proceedings of the National Academy of Sciences, which showed that the type of Bach music participants listened to affected which colors they chose afterward. “Faster music in the major mode, produced color choices that were more saturated, lighter, and yellower," the study concludes. "Whereas slower, minor music produced the opposite pattern — choices that were unsaturated, darker, and bluer.” The colors were chosen from the whole ROYGBIV spectrum, including red, orange, yellow, chartreuse, green, cyan, blue, and purple (all of which had four values of brightness and vividness) as well as the basics — white, black, and a few versions of gray.
Advertisement
“While we did not use brain scans to know exactly what neural events are occurring that made them choose certain colors for certain music more than others, it seems likely that the tempo-to-emotion link is related to patterns of motor behavior,” says Palmer. Essentially, faster tempos could be associated with more positive emotions (happiness) and slower tempos with less positive emotions (sadness). All this basically mirrors real life: “People are typically more energetic when happy — they skip and dance when ecstatic — and more lethargic when sad,” he says. Although, he notes that the real why is still very much a mystery in the scientific arena. Even though the differences in notes are often seemingly insignificant, they can drastically alter someone’s emotions.
Want to test it out? Try out our non-Bach tunes (that have emotion-evoking lyrics, too, unlike in the study) just for fun! Play any of them as you get dressed today, and point to the colors that are the most consistent with the tunes. 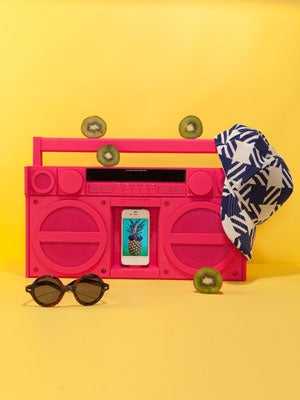 “Darkness and blue could be associated with twilight and night, which tends to make people feel withdrawn and sad,” explains Palmer. “And the cones in our retina are least sensitive to blue light.”
Red Hot

Advertisement
“Anger may be linked to red, because people's faces get red when they get angry (and blood rushes to their faces),” says Palmer.
Keep Calm and Listen On

“A feeling of calm is often tied to more subdued (muted) colors, probably because they are less energetic colors,” says Palmer.
Dating Advice
On Dating Apps, We’re All Each Others’ Ghostwriters
Dating can be a lonely business — but it doesn’t have to be. I’ve known this since the 7th grade, when I fell in puppy love with my first real boyfr
by Molly Longman
Coronavirus
Is 25 The Worst Age To Be During The Pandemic? A Very Serious Inv...
When I was 15, I thought that by the time I turned 25 I’d be a successful, confident, grown adult. I pictured myself traveling the world; I also figured
by Elizabeth Gulino
News
Why Is Laverne Cox’s Voice Being Dubbed By Men?
The international release of Emerald Fennell’s revenge thriller Promising Young Woman was postponed amid outrage that a male voice actor was hired to
by Erin Corbett
Advertisement
Coronavirus
Fully Vaccinated People Can Stop Wearing Masks Indoors (Really!)
Update: There’s been a major change to indoor mask guidelines. On Thursday, May 13, the Centers for Disease Control and Prevention announced that th
by Elizabeth Gulino
News
Yep, Prince Harry Is Definitely Fluent In “Therapy T...
Prince Harry has been a mental health advocate for years, but in his first interview since he and Meghan Markle sat down with Oprah Winfrey, he really want
by Lydia Wang
Coronavirus
These Intimate Photos Offer A Window Into Lives Of 8 Trans People...
The word complicated doesn’t begin to sum up the experience of the past 14-plus months. It’s impossible to understate the effect COVID-19 has had on us
by Refinery29
Horoscope
Is Jupiter In Pisces The Best Transit Of 2021? Astrologers Think So
Jupiter is one of the luckiest planets in astrology, and it’s making its way into the dreamy sign of Pisces on May 13. This combo hasn’t happen
by Elizabeth Gulino
LGBTQ+
Joshua Bassett On His Sexuality: “Love Who You Love Shamele...
After Joshua Bassett praised Harry Styles during a viral interview this week, he posted on Instagram that it’s okay to take time to figure out your s
by Lydia Wang
Most Wanted
The Best (Actually) Travel-Friendly Workout Gear To Take Everywhere
by Karina Hoshikawa
News
Courtney Stodden’s Trauma Isn’t Just From Their Husba...
Courtney Stodden, who first made headlines in 2011 when they married The Green Mile actor Doug Hutchison, is now opening up about the abuse they experience
by Sarah Midkiff
Horoscope
Dust Off Your Vision Board: The New Moon Is In Taurus
Close your eyes and think for a minute: What is it that you desire most in this world? Is it a loving, caring parter? A truly supportive and tight-knit soc
by Elizabeth Gulino
Feel Good Diaries
Dua Lipa Is Better At Washing Her Face Than You Are
Welcome to Refinery29’s Feel Good Diaries, where we chronicle the physical and mental wellness routines of women today, their costs, and whether or not t
by Dua Lipa
Advertisement
Advertisement
Discover
R29 Stories & News
Watch
R29 Original Series & Films
Shop
R29's Most Wanted