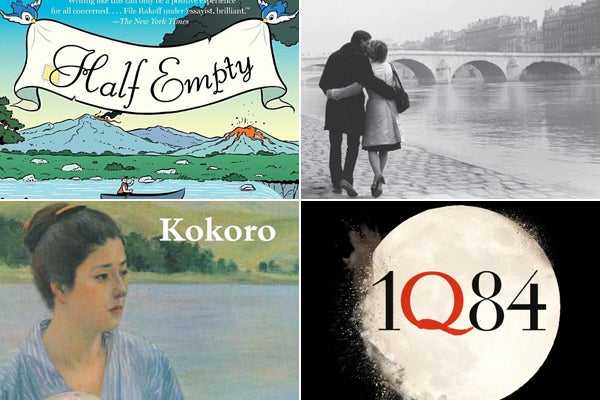 Don't get us wrong, this week wasn't that bad. But, everyone once in a while we could all use a piece of literature that's a little less "happily every after" and a little more "life's tough, get a helmet." With that in mind, it was actually more of a coincidence that we R29 editors all selected a batch of books this week that don't sugar coat.
Feel-good tales? Maybe not. But, these tomes are thought-provoking, eye-opening, and deep. This week's five recommendations from our edit team promise a meaningful summer read that'll keep your head spinning even after you've turned the last page.
Advertisement

Half Empty, David Rakoff
"I picked up Half Empty when it was first released in 2010, but it's sat unread on my shelf until recently. I've been listening to This American Life religiously since I used to stay up late on Sunday nights in middle school in order to catch the reruns via a beat-up boombox, and David Rakoff's sardonic but deeply kind POV on life's little oddities were a huge part of my coming of age. His death this August was an opportunity for me to revisit all his past novels, short stories, and programs, and to savor his last book, Half Empty, in which he deals with finding a malignant tumor in his shoulder. Though it's incredibly sad, Rakoff shows again that even the bleakest of moments can contain humor, grace, and beauty."
—Connie Wang, global editor

Kokoro, Natsume Sōseki
"The sparse prose isn't for everyone, but this novel set in the end of the Meiji period — my very late introduction to Japanese literature — is one of the most beautiful things I've ever read. The delicate, tense plot is just barely held together and always feels on the edge of bursting, but it denies you that satisfaction and is a better book for it. The story's seasonal change is accompanied by an ever-so-slight tonal shift that makes this the perfect reflective (albeit depressing) read to end a happy-go-lucky summer."
—Lexi Nisita, associate community editor

Paris: A Love Story, Kati Marton
"As the name would suggest, the book is centered around Paris, where author Kati Marton experienced both the best and worst times of her life. The book is a detailed memoir spanning everything from her marriage to the late Richard Holbrooke to her 15 year marriage to Peter Jennings. It is indeed a love story that covers love, loss, and life after both, with Paris as the backdrop for all of it. While it's not the most uplifting summer read, it's certainly one that makes you think about life and how precious each moment is — and we all need a reality check once in a while!"
—Rebecca Taras, Chicago editor

1Q84, Haruki Murakami
"A week later I'm still in a dream-like coma from this sensitive thriller. From page one, Murakami sends you into a world where nothing is what it seems — where questions about identity, love, religion, and justice all meld into one. The novel's hefty size may seem like a turn-off, but it comes in a paperback, three-volume set, great for commuting. And it's all entirely perfect for carrying summer daydreaming well into fall."
—Chloe Daley, production editorial assistant

Gone Girl, by Gillian Flynn
"Before I even had the chance to crack the (e-)cover of this suspense thriller, I had about a billion people tell me it was an absolute must-read. This is so not the feel-good read of the summer — the twisty turns and dark premise will literally fray your nerves down to a threadbare string, but an infusion of sharp wit keeps it from being too intense (but not by much). While it may not be a beach-friendly read, it is deeply engrossing — be ready to gulp this down in an hours-long reading binge."
—Megan McIntyre, senior beauty editor