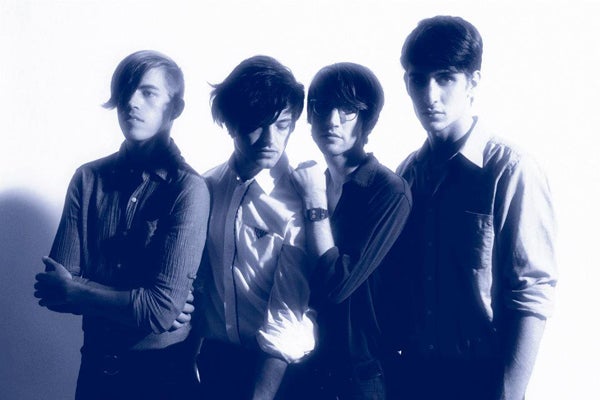 When we first wrote about Ice Choir back in September, they were still emerging as the new solo project from The Pains of Being Pure at Heart’s Kurt Feldman.
But now, Feldman appears to be in full command of his ‘80s synth influences, and “I Want You Now And Always,” the latest single from Ice Choir's debut record, Afar, proves it. While an earlier version of “I Want You Now And Always” had been floating around the Internet since 2010 – clearly Feldman’s interest in synthpop is not fleeting – the current version is slick and emotional in the tradition of Tears for Fears and The Cure (who we’re honestly surprised don’t already have a song bearing the same name). This may be precisely what James Murphy meant by the “borrowed nostalgia for the unremembered eighties.” And hey, maybe that's not such a bad thing. (Stereogum)
Ice Choir—Afar
"I Want You Now And Always" [MP3]

Entertainment
Looking Back, Scarlett Definitely Thinks Black Widow Was Overly S...
As her time within the Marvel Cinematic Universe officially comes to a close with Black Widow, Scarlett Johansson is taking stock of her superhero experien
by Ineye Komonibo
Music
Billie Eilish’s Boyfriend Apologizes For Past Alleged Offen...
We’ve barely even been introduced to Billie Eilish‘s boyfriend (no, not the ex fans think she wrote “Your Power” about), and alread
by Natalie Morin
Pop Culture
Space & The City: Kim Cattrall Is Going To The Moon
Samantha Jones may be absent from the upcoming Sex and the City HBO Max reboot, but she has bigger plans — and for once, that’s not a euphemism. Ki
by Natalie Morin
Advertisement
TV Shows
There’s Meaning In Every ’90s Song You’ve Heard...
by Rosie Knight
Entertainment
Rita Moreno Is “Disappointed” By Her Initial Reaction...
Updated June 17, 2021: Rita Moreno is walking back her controversial response to the In the Heights backlash and apologizing — sort of. Just one day afte
by Ineye Komonibo
TV Shows
Cruel Summer’s Grooming Storyline Shows The Pitfalls Of ...
Spoilers are ahead. When Kate Wallis (Olivia Holt), a victim of sexual assault and kidnapping by her school’s vice principal Martin Harris (Blake Lee), t
by Natalie Morin
TV Shows
We Barely Saw Kendall Jenner’s Love Life On KUWTK Becaus...
A recent teaser for the upcoming Keeping With The Kardashians reunion special made us believe that Kourtney Kardashian was the only one holding out on us.
by Natalie Morin
Books & Art
Actually, Comedian & Writer Quinta Brunson Loves The Kids
The proverbial man would like us to believe that there’s a deep-rooted, burning rivalry between millennials and Generation Z, positioning the groups
by Ineye Komonibo
Best of Netflix
Everyone Is At Home Watching These 10 Shows & Movies On Netflix R...
by Ineye Komonibo
Marvel
Just How Excited Should We Be About Loki‘s Newest Ch...
Spoilers are ahead for Loki episode 2. With the explosive arrival of a new villain on the Disney+ series Loki, the Marvel multiverse is finally open for bu
by Leah Marilla Thomas
Celebrity Couples
Speaking Of Celebrity Exes, Kylie Jenner & Travis Scott Might Be ...
Hot girl summer is officially upon us, but it seems like everyone but Hollywood got the memo. Numerous celebrities have been getting back together with the
by Ineye Komonibo
TV Shows
19 TV Mystery Shows To Watch Now That Cruel Summer Is Over
by Rosie Knight
Advertisement
Advertisement
Discover
R29 Stories & News
Watch
R29 Original Series & Films
Shop
R29's Most Wanted