Skip navigation!
Story from Entertainment
Has anyone said this shit? Legions of tail-end trend followers are asking themselves this question right now as they prep their own "Shit _____s Say" videos. Due to the massive proliferation of similar clips that followed the genre-defining "Shit Girls Say Part 1", it can be hard for aspiring shit sayers to find out if there already exists a "Shit Dog Trainers Say" or a "Shit Malawians Say" in the rapidly growing marketplace of people saying shit. In response the worldwide interest in the kind of shit different types of people say comes the timely and brilliant Has Anyone Said This Shit?, a simple search engine where you can type "golf instructors", "dulas", or pretty much anything you want between "Shit" and "Say" and find out once and for all if anyone has already said that shit. (Has Anyone Said This Shit?)

Image: via Has Anyone Said This Shit? 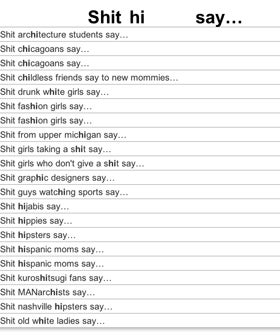