Skip navigation!
Story from Washington, D.C.
While "the war on women" might be the dramatic political catchphrase of the moment, it's hard not to get on board with the notion — especially when sexism trickles down into your commute. Women are the unlikely (and, if we're trying very hard to be generous, perhaps unintentional) target of Metro's new ad campaign, as reported today by DCist. In an advertisement placed inside the Metro Center station, two women are having a thought-bubble conversation. The first rattles off a random statistic about how far Metrobuses travel in between (commute-destroying) breakdowns. The second responds with, "Can't we just talk about shoes?" Zing.
It's beyond infuriating that Metro would green-light an ad that employs the sexist trope of a woman's love for shoes overtaking her ability to hold an intelligent conversation. For what it's worth, we'd rather Metro spend its precious budget on, you know, fixing escalators and finishing up track work than trying to convince us that it's problems — i.e., broken-down buses — aren't all that bad. Oh, and for the record, when was the last time you had more than a 30-second discussion about shoes? We're going to stick it to Metro, in our own imaginary way, and pretend that Lady #2 is actually a brilliant cultural historian who's writing a dissertation on the importance of shoes in society. (You know, those things you rely on when you have to run to catch a bus or wait forever on a subway platform.) (DCist) 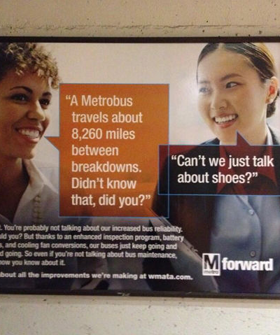 Photo: Via DCist.
Unbothered
#BlackburnTakeover Protests: A Howard University Student Reports ...
It’s Homecoming season at Howard University, but there’s a noticeable difference on the HBCU campus this year. Students line up under canopies offering
by Michelle H.
News
It Isn’t Just The Government That’s Under Attack — It...
When thousands of violent extremists incited by President Donald Trump burst into the Capitol building yesterday, it instantly dominated news coverage. But
by Natalie Gontcharova
Work & Money
What $100 Will Get You In Each State
Folks, it might be time to consider relocating. The Bureau of Economic Analysis recently released a report measuring price disparities across different sta
by Jessica Chou
Advertisement
Washington DC
Your Guide To An Awesome Last-Minute Getaway Near D.C.
by Ayren Jackson-Can...
Entertainment News
Rihanna Rings In The United States Of Amerihca
by Hayden Manders
Entertainment News
Girl Hopes For Beyoncé, Gets Obama Instead
You can't always get what you want. But, if you try sometimes, you just might find — wait, we got off track. You can't always get what you
by Hayden Manders
Washington DC
How The Nerd Prom Has Become The Coolest Ticket In Town
On one special night of the year, the men and women in D.C. trade in their pocket protectors and ID lanyards for pocket squares and custom gowns to attend
by Laura Schwartz
Washington DC
8 Things To Know This AM — Apr 30 2014
In D.C., the White House has issued a list of recommendations to colleges about how they should handle and prevent sexual assault on campus. (The Washingto
by Hayden Manders
Washington DC
Glitz, Glamour, & Spring Arrive In D.C. With Our Hollywood-Inspir...
by Ashley Mateo
Washington DC
This News Presenter Shares Her On-Set Routine
How do you like to start your day? What news show do you like to kick it off with? We don’t play favorites. Instead we feature anchors we love, one being
by The New Potato
Washington DC
Party (& Shop) Like A Star In D.C. With R29 & CUSP
Photographed by Jesse Webster. Fashion, like Hollywood, is constantly evolving. As fast as labels and designers can churn out new styles, there are up-and-
by Ashley Mateo
Home
6 Up-And-Coming Artists To Start Collecting Now
by Kristin Guiter
Advertisement
Advertisement
Discover
R29 Stories & News
Watch
R29 Original Series & Films
Shop
R29's Most Wanted