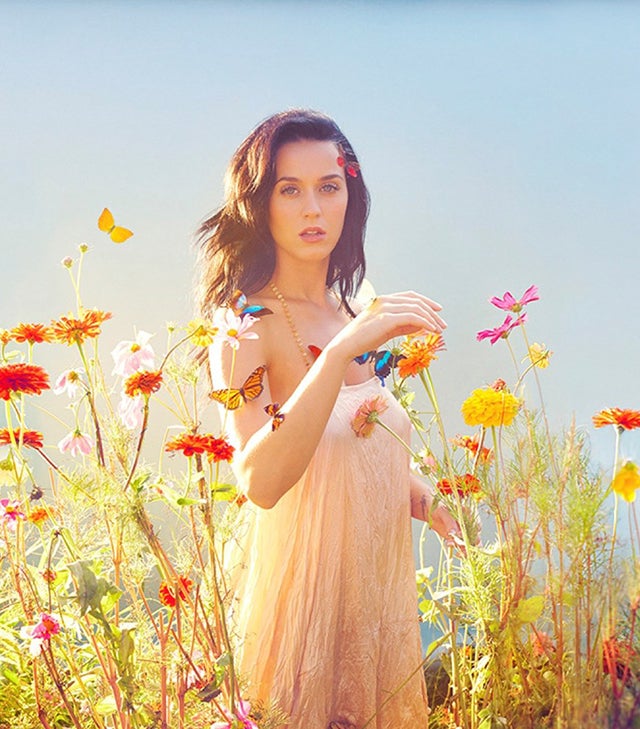 Photo: Courtesy of Capitol Records.
With the release of her third album (and first since her divorce), Katy Perry isn't bursting at the seams with overly saturated colors and chart-dominating material. Prism marks the singer's maturation in the pop scene. She's grown up and away from her teenage dreams, and as much as we'd like to say time calmly nurtured them out of her, the reality is that love shattered them. The bubbly, public personality, who shares the record of the most number-one singles off a single album with Michael Jackson, was haunted by the ghost of her marriage with Russell Brand in private. So, she dyed her hair dark and retreated from the spotlight to get her head back on.
Advertisement
Now she's back with a carefully constructed body of work that, lyrically, doesn't dodge the harsh blow of the world while still beating in the bubbly pop vein of her entire oeuvre.
She begins her transformation with a roar, literally. The anthemic single kicks us off with a self-reflective ode to the reinventing. "You're gonna hear me roar," she repeats. And, for the better part of the first 30 minutes, she does. Songs of weekend debauchery á la the style of "T.G.I.F." ("This Is How We Do") are paired with Perry's cheeky bedroom innuendos in "Birthday," the song most similar to Dream's "Peacock." It could be assumed that the blissful moments of the opening songs, the lightheartedness and relative carefree, dancehall-ready sounds are in response to her relationship with John Mayer, but they might also be a reflection on the early stages of her and Brand's flirtation. Whatever the true story behind them is irrelevant. This is an album of reawakening, of being transparent enough with you and your wellbeing that the light within you shines in a brilliant menagerie of hues (hence its title).
With lyrics reminiscent of the newly enlightened Alanis Morissette, Perry has made an album that takes the nostalgia of mid-'90s dance-pop and spins it through a fantasy Disney princess filter. Songs of suicide and divorce like "By The Grace of God" and "Ghost" (respectively) are songs of growth rather than songs of wallowing. A theme of marching on is threaded through the entire album. Quite literally with one of Prism's standout tracks, "Choose Your Battles" (the final song on the deluxe album), Perry rises as the victor of her own story over a triumphant drum line while belting the power chords of "I'm not fighting anymore." It's a heroic moment that summarizes Prism's entire aura. Girl loses the boy; girl gets knocked down, and like a proper fairy tale, girl rises stronger. Only there's no prince helping in Perry's princess story. She does it all on her own, and that's a fairy tale for the ages.
Entertainment
The Fallout Isn’t Just About Another School Shooting
Spoilers ahead. The Fallout only needs five minutes to completely break you. In the last heart-wrenching moments of the movie, out on HBO Max on January 27
by Katherine Singh
Unbothered
Love & Hip Hop Gets Rooted In A New Special About African ...
Since its series premiere in 2011, VH1 original reality series Love and Hip Hop has taken music fans all over the country, making stops in New York City, M
by Ineye Komonibo
Unbothered
Millennials, Have We Aged Out Of The High School Genre?
Five years after the series finale of Degrassi: Next Class — the fifth iteration of the popular Canadian teen franchise — HBO Max announced that it wou
by Ineye Komonibo
Advertisement
Entertainment
She Created Her Own Korean Disney Princess Musical & This Needs T...
When most people think of an Asian Disney princess, there’s often one go-to: Mulan aka the Chinese heroine who doesn’t need saving but instead save
by Katherine Singh
Entertainment
How Scammers Became Accidental Antiheroes Of The Girlboss Era
Con artists are nothing new. But our collective interest in them has been piqued in recent years as a number of high-profile scandals have redefined the wa
by Alice Porter
Dedicated Feature
Single Drunk Female — A Must-See Comedy About Sobriety —...
Margarita Mondays. Wine Wednesdays. Happy hours. “Book club.” In a world in which drinking culture is the norm, with holidays (St. Patrick’s Day, New
by Andrea Cheng
Unbothered
In Defense Of Ari Lennox’s Trip to Ghana: The Power and Pro...
Grammy-nominated musician Ari Lennox recently performed at Ghana’s Afrochella music festival and shared her experience in the West African nation on Twit
by Qali Id
Somos Latinx
How Afrobeats Is Musically Bridging Black Latinxs and Africans
The first time I heard Colombian pop singer Maluma’s “Mama Tetema,” featuring Tanzanian singer-songwriter Rayvanny, I was writing a script for VEVO?
by Marjua Estevez
Unbothered
Netflix Has A Hit On Its Hands With The New Cast Of Too Hot To...
Spoilers for Netflix’s Too Hot to Handle ahead. Too Hot to Handle came to us at the beginning of the coronavirus pandemic. It was gloriously-timed conten
by Ineye Komonibo
Unbothered
And Just Like That… Sex and the City Still Doesn’t D...
Sex and the City is such a pop-culture juggernaut that many Black women can make some reference to it, whether it be a love of the Cosmopolitan, a salute t
by Niki McGloster
Unbothered
Still Missing Insecure? These New Black Shows Will Make It...
by Ineye Komonibo
Unbothered
It’s Time For Black TikTok Creators To Be Paid Their Worth
Forbes recently named TikTok’s top-earning creators, including Charlie and Dixie D’Amelio and Addison Rae.
by Venesa Coger
Advertisement
Advertisement
Discover
R29 Stories & News
Watch
R29 Original Series & Films
Shop
R29's Most Wanted