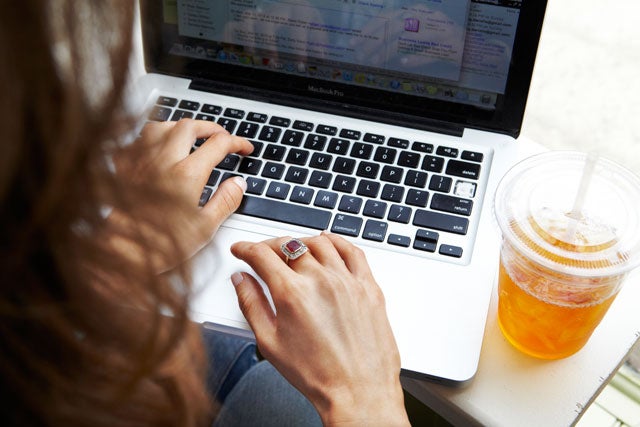 Photographed by Bek Andersen.
Fact: Breakups suck. It doesn't matter if you were on the receiving end of the "Dear Jane" letter or did the dumping yourself, it can still be nearly impossible to resist checking up on a former flame — especially since social media makes it so easy to pseudo-stalk. Is Googling an ex akin to poking a bruise? Absolutely. But, we do it anyway, and a new study from Pew Research Center reveals that we're far from alone. Turns out, 48% of twentysomethings (men and women ages 18 to 29) are guilty of snooping the interwebs for new details about past loves.
The real kicker? While nearly half of study participants were looking for clues to an ex's current happiness, only 31% of them admitted to posting pictures or details from their own dates on their social networks. So, if the findings are accurate, whatever it is you're looking for, you're probably not going to find it. Take it from us: Peeking into the past rarely does anything to make you feel better about things. The best way to get past a breakup is to move forward, one step at a time. But, there's a bright side! The study also asked participants whether they've indulged in online flirting; 27% of men and 21% of women said yes. So, hey, that means there's a decent portion of the population just waiting to exchange a wink or innuendo-laden message with you — what are you waiting for? (The Atlantic)
Unbothered
These Herbalists Are Helping Black Women Heal — One TikTok At A Time
According to the latest TikTok trends, herbalism is the new glow-up hack. For decades, herbalists have used plants for healing purposes and to study the im
by Celeste Polanco
Gift Guides
Pamper Yourself With One Of These 27 Giftable CBD Treats
by Sara Coughlin
Health Trends
33 Halloween Costumes For Badass Feminists
by Lux Alptraum
Advertisement
Wellness
These Mothers Are Fighting Coronavirus On The Frontlines — & It&#...
Each evening, the 7 p.m. cheers ring out in New York City. Some bang on their pots, some clap, while others hoot loudly. You would think this boisterous sc
by Sophie Hayssen
Marijuana & Culture
9 Weed Subscription Boxes To Celebrate 4/20 Today (And Whenever Y...
by Sarah Jacoby
Health News
Doctors Are Going Viral — & Getting Fired — For Discussing Corona...
People all over the world, including those on the frontlines, are using social media to share how they’re coping with the coronavirus crisis. We̵
by Araceli Cruz
Coronavirus
A 5-Minute Coronavirus Test Is Coming. Here’s What You Need...
In what seems like the first good news about coronavirus in a minute, Abbott Laboratories is getting ready to launch a test that can tell if someone is inf
by Tanya Edwards
Shopping Beauty
These Are 10 Top Beauty Products That People Are Actually Buying ...
If you’re reading this, then at some point or another, you’ve probably come across our monthly digest on all the hair, makeup, and skin ca
by Karina Hoshikawa
Health News
Dozens More Women Accuse Doctor Of Sexual Assault After Evelyn Ya...
A former Columbia University Ob/Gyn is facing accusations of sexual assault from nearly 40 new women, joining 32 others including Evelyn Yang, wife of form
by Alejandra Salazar
Health Trends
11 Amazing Black Women Athletes You Should Know About
by Cory Stieg
Wellness
How To Make Your New Year's Resolutions Stick
There should be a holiday that’s scheduled about a week after New Year’s Day, and is devoted to reevaluating all of the resolutions that you co
by Cory Stieg
Dedicated Feature
I’m A 33-Year-Old Dental Hygienist & Freezing My Body To -1...
by Us
Advertisement
Advertisement
Discover
R29 Stories & News
Watch
R29 Original Series & Films
Shop
R29's Most Wanted