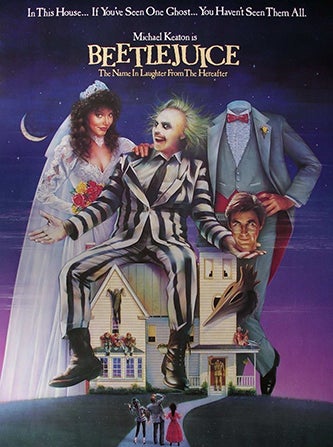 Photo: Courtesy of Warner Bros.
Either Tim Burton heard us whisper "Beetlejuice" three times or he just really, really wants to show Robin Thicke who wore the black-and-white-striped suit better, because Beetlejuice 2 is probably happening. Yep, the well-dressed ghostbuster is slated for a comeback.

Variety
reports that Burton and Michael Keaton are discussing reuniting for a sequel to their 1988 ghoul story. Seth Grahame-Smith, the original screenwriter, tweeted that big and daunting news was on the way, setting the rumor mill in motion.

Burton isn't keen on sequels, though. Sure, he did Batman Returns, but that, according to the man himself, was a rarity. He's currently filming Big Eyes with Christoph Waltz and Amy Adams and hasn't committed to any sort of Beetlejuice sequel. Keaton, however, is eager to don the suit again. Sources close to the actor have reported that he and Warner Bros. have been bouncing the idea back and forth. Perhaps Keaton can channel his beloved character to chase Burton out of his own non-sequel house. That would really make our millennium. (
Variety
)