Skip navigation!
Story from Washington, D.C.
Maybe it's a watershed moment when it comes to recognizing women, or just a "well, duh" sort of consensus, but news outlets and politicians alike are crediting female lawmakers with ending the government shutdown. For background, a bipartisan group formed by Republican senators Susan Collins of Maine, Lisa Murkowski of Alaska, and Kelly Ayotte of New Hampshire began constructing the framework of a deal to end the shutdown earlier this week. Eventually, they were joined by three Democratic female leaders (Amy Klobuchar of Minnesota, Heidi Heitkamp of North Dakota, and Jeanne Shaheen of New Hampshire), as well as eight male counterparts. This group of 14 lawmakers ultimately created the basis for the deal that was finalized by Senate Majority Leader Harry Reid and Minority Leader Mitch McConnell and got the government up and running again (at least for now).

The group comprises something that is unprecedented in Congress' history — an assembly of lawmakers that represent bipartisanship and gender equality. Outlets ranging from the
New York Times
and the
Washington Post
to
USA Today
and MSNBC picked up on it. Senator John McCain chimed in, saying that "leadership, I must fully admit, was provided primarily by women in the Senate." We're seriously pumped about what this accomplishment says about female governance in this country — that women lawmakers are level-headed and thoughtful, willing to compromise, yet also tough negotiators — and about the fact that credit is being given where it's due. We sincerely hope that Susan Collins (and all her fellow lawmakers) takes a moment to do the "brush your shoulders off" move in the privacy of her office. 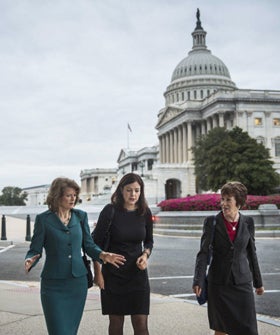 Photo: Via Time/Andrew Burton/Getty Images.
Unbothered
#BlackburnTakeover Protests: A Howard University Student Reports ...
It’s Homecoming season at Howard University, but there’s a noticeable difference on the HBCU campus this year. Students line up under canopies offering
by Michelle H.
News
It Isn’t Just The Government That’s Under Attack — It...
When thousands of violent extremists incited by President Donald Trump burst into the Capitol building yesterday, it instantly dominated news coverage. But
by Natalie Gontcharova
Work & Money
What $100 Will Get You In Each State
Folks, it might be time to consider relocating. The Bureau of Economic Analysis recently released a report measuring price disparities across different sta
by Jessica Chou
Advertisement
Washington DC
Your Guide To An Awesome Last-Minute Getaway Near D.C.
by Ayren Jackson-Can...
Entertainment News
Rihanna Rings In The United States Of Amerihca
by Hayden Manders
Entertainment News
Girl Hopes For Beyoncé, Gets Obama Instead
You can't always get what you want. But, if you try sometimes, you just might find — wait, we got off track. You can't always get what you
by Hayden Manders
Washington DC
How The Nerd Prom Has Become The Coolest Ticket In Town
On one special night of the year, the men and women in D.C. trade in their pocket protectors and ID lanyards for pocket squares and custom gowns to attend
by Laura Schwartz
Washington DC
8 Things To Know This AM — Apr 30 2014
In D.C., the White House has issued a list of recommendations to colleges about how they should handle and prevent sexual assault on campus. (The Washingto
by Hayden Manders
Washington DC
Glitz, Glamour, & Spring Arrive In D.C. With Our Hollywood-Inspir...
by Ashley Mateo
Washington DC
This News Presenter Shares Her On-Set Routine
How do you like to start your day? What news show do you like to kick it off with? We don’t play favorites. Instead we feature anchors we love, one being
by The New Potato
Washington DC
Party (& Shop) Like A Star In D.C. With R29 & CUSP
Photographed by Jesse Webster. Fashion, like Hollywood, is constantly evolving. As fast as labels and designers can churn out new styles, there are up-and-
by Ashley Mateo
Home
6 Up-And-Coming Artists To Start Collecting Now
by Kristin Guiter
Advertisement
Advertisement
Discover
R29 Stories & News
Watch
R29 Original Series & Films
Shop
R29's Most Wanted