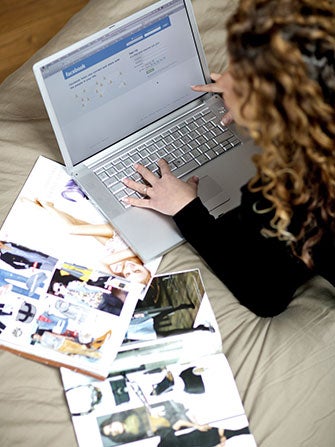 Photo: REX USA/Etienne Ansotte.
Until this week, Facebook had a security policy in place that made it impossible for strangers to view posts by users under the age of 17. While adults can make a decision whether their posts and Likes are visible to friends, friends of friends, or the entire world, the third option was only recently made available to teens. According to a Facebook press release, “Teens are among the savviest people using social media, and whether it comes to civic engagement, activism, or their thoughts on a new movie, they want to be heard. So, starting today, people aged 13 through 17 will also have the choice to post publicly on Facebook.”
As The New York Times correctly points out, however, it's not that simple. Teens are a key demographic for advertisers and marketers. It goes without saying that Facebook is under a lot of pressure to make money right now. And, by making that information public, the social network can compete with other sites like Twitter and Tumblr, where teenagers make up a huge portion of the daily conversation.
Of course, the concern here is that teenagers might not have the foresight to realize their statements will become permanent public record. Even fully grown adults make mistakes on social media that can ruin their careers or relationships. On the one hand, any teenager using social media needs to be aware of the fact that Internet privacy is often an illusion; on the other, a lot of people seem to agree that the basic risks of having an online personality is enough without making posts visible to anyone and everyone. What do you think? Are there moments from your own adolescence that you're relieved aren't forever captured online for everyone to see? (The New York Times)
Sustainability
Real People Share Their Favorite Reusable Water Bottle Brands
by Angela Tafoya
San Francisco
S.F.'s Best Cheap-Eats Spots (& What To Order)
by Lauren Sloss
Tech
8 Young Professionals Share Their Work Secrets
The tech industry is growing at a head-snapping pace, with a pool of talent that includes some of the world’s brightest innovators, movers, and shake
by Angela Tafoya
Advertisement
Hair
4 DIY Hairstyles That Take Unwashed Hair To The Next Level
In a dream world, we would all roll out of bed with perfectly imperfect hair. You know, like the stuff you see in rom-coms and on Kate Moss. But, let’s b
by Katie Nash
Work & Money
This Entire Company Got Totally Naked For April Fools’ Day ...
by Angela Tafoya
Books & Art
This Artist Endured 8 Hours Of Catcalling To Fight Sexual Harassment
by Natasha Young
San Francisco
What It’s REALLY Like To Be A San Francisco Barista
by Kelly Anne Bonner
San Francisco
Farm-To-Table Weed Exists — & It Comes In A Mason Jar
I get a text message alerting me that my marijuana delivery will be at my apartment in four minutes. “You can track your driver by clicking this link
by Matthew Latkiewicz
San Francisco
10 NSFW Moments From The World’s Biggest Leather Event
by Michele Bird
San Francisco
15 Chic Styles You’ll Want From Everlane Now
by Michele Bird
San Francisco
The 15 Most Beautiful Spots In San Francisco
by Michele Bird
Home
This San Francisco Home Has The Most Beautiful Travel Souvenirs
by Homepolish
Advertisement
Advertisement
Discover
R29 Stories & News
Watch
R29 Original Series & Films
Shop
R29's Most Wanted