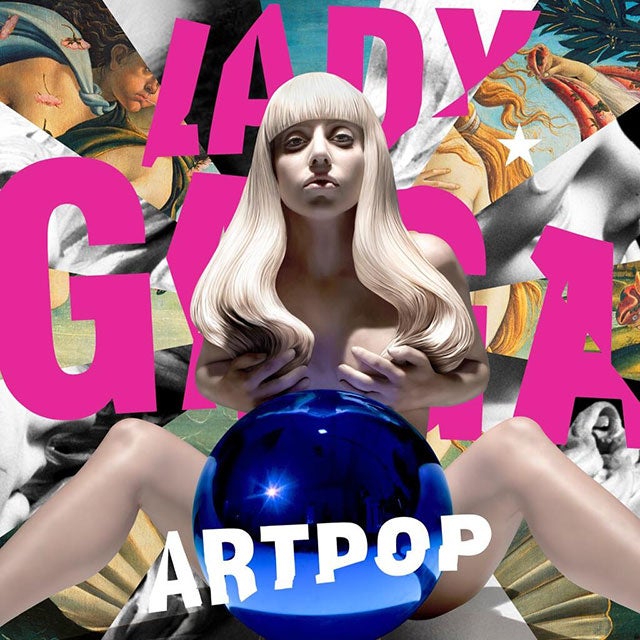 Photo: Courtesy of Interscope.
Since early January, Gaga fans have been hungry for details on the ARTPOP project. Today, we've got some big news. Gaga tweeted the track list of her November 8 release with the help of the L.A. Rivington Rebels graffiti art. T.I., Too $hort, and Twista are featured on a track, but we already knew about that thanks to Gaga's iTunes Festival performance. Gaga also confirmed that the final installment of her femme fatale video trilogy, featuring "Paparazzi" and "Telephone," will come out of this album. But the biggest surprise is R. Kelly, who appears to have collaborated with the great Ga on a track.
Advertisement
The song in question, "Do What U Want," is a surprise to say the least. Rumors of a Rihanna x Lady Gaga collaboration seemed like the duet-most-likely after Rih cryptically tweeted about a "#monster" studio session with one of her favorite artists. She then went on to tweet lyrics of Gaga'a new song "Sexxx Dreams," which Gaga responded to. And, yet, there's no Rihanna to be found on the track list! Sigh.
Beyoncé, who was also rumored to be involved in the album, is no where to be found on the 15-song LP. Nor is Azealia Banks, who was also expected to make an appearance. There is still hope, though. Most artists these days are releasing deluxe editions of their albums featuring more songs. Gaga hasn't mentioned whether the track list is for the regular or deluxe versions of ARTPOP.
The musician's track list has become kind of a big deal these days. Fans take to forums to speculate the the names of songs, who's guest starring, and what they'll sound like even before an artist has wrapped up in the studio. It's the fantasy football of the music industry. Check out Gaga's line-up below.

(Vulture)
Living
This Couple Got Married While Running A Marathon — No, REALLY
What an amazing day!!! #marathonwedding @ChiMarathon pic.twitter.com/rHQ7HxkOfT — Stephanie Reinhart (@kitchy7) October 12, 2015 Like many couples, S
by Ally Hickson
Chicago
J-Lawr & Amy Schumer Boogie Atop A Piano During Billy Joel’...
First Taylor Swift, now Billy Joel. Apparently 2015 is the year that really famous pop stars bring other really famous celebrities onstage with them to per
by Elizabeth Kiefer
Chicago
The Lazy Girl’s Guide To Amazing Skin: Summer Edition
by Melanie Rud Chadwick
Advertisement
Chicago
7 Cool Shops To Visit In Chicago This Weekend
by Christina Perez
Chicago
Found! The Perfect Last-Minute Summer Getaway
by Rebecca Taras
Chicago
7 Chicago Food Experts Reveal Their Fave Summer Eats (& More!)
There’s so much to love about Chicago summers, and tops among them is the food: The bounty of fresh fruits and veggies at farmers’ markets, the
by Judy Sutton Taylor
Chicago
20+ Pics Of Pitchfork’s Most Inspiring Street Style Stars
by Erin Donnelly
Chicago
How To Do Chicago Like A Lollapalooza All-Star
by Leah Pickett
Chicago
11 Chicago Dream Apartments To Rent Right Now
by Stephanie Sims
Chicago
18 Delicious Chicago Dishes For Your Foodie Bucket List
by Caroline Stanley
Chicago
Chicago’s Best Al Fresco Happy-Hour Spots
by Amelia Levin
Chicago
How Two Sisters Are Changing The Way We Namaste
We tend to think the best decisions in life are made over pizza. Case in point: One frigid January night last year at Pequod’s, sisters Natalie and A
by Jourdan Fairchild
Advertisement
Advertisement
Discover
R29 Stories & News
Watch
R29 Original Series & Films
Shop
R29's Most Wanted