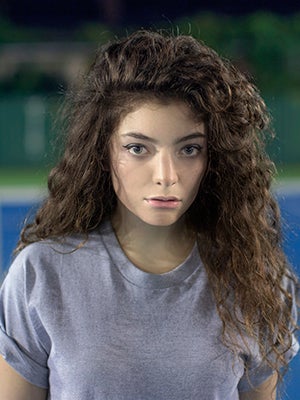 Photo: Courtesy of Universal Music.
It's been less than five days since we introduced you to 16 year-old Lorde. We were just about to go listen to "Royals" for the umpteenth time, when we learned that the singer has bestowed a little treat: A live stream of her first full-length LP, Pure Heroine. And, after listening to the short 40-minute album, all we have to say is, "Yes."
"Royals" was, despite its all-around greatness, a tease compared to the rest of Lorde's catalogue. Pure Heroine is intelligent commentary on the state of adolescence in the Internet age, cleverly wrapped up in a pop package. "Maybe the Internet raised us, or maybe people are just jerks," she speak-sings on "A World Alone." It's this single verse that sums up her entire sonic thesis; she's both frustrated and enthralled with growing up. She's "over being told to throw her hands up in the air," but then follows that up with a song about teenage partying. There's a knowing wink to the debut album, so, it's that keen sense of awareness that makes this album one of the albums to watch out for when it drops on September 30th.
Until then, preview it in full below. (Slate)