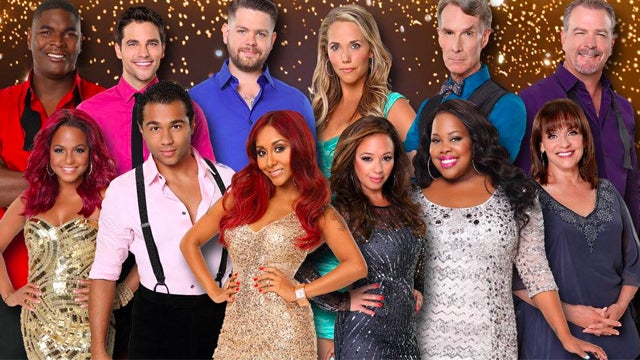 With September comes the apple harvest, Burning Man, and another season of
Dancing With the Stars. But you can only catch Rhoda, Bill Nye The Science Guy, and not one but two Saved by the Bell vets at one of them. Sadly, it's not Burning Man. Last night, 12 B-listers and their professional dance partners took to the ballroom floor to kick off season 17, which features Elizabeth Berkley, Corbin Bleu, Brant Daugherty, Bill Engvall, Valerie Harper, Keyshawn Johnson, Christina Milian, Bill Nye, Jack Osbourne, Nicole "Snooki" Polizzi, Leah Remini, and Amber Riley. Were you too busy watching the
Sleepy Hollow
premiere instead? Catch up with some highlights from the new season:

Advertisement
-Amber Riley was the clear frontrunner, no doubt due to her dance training on Glee. Judge Bruno Tolioli called her the "tigress of season 17."
-Bill Nye, unfortunately but also unsurprisingly, pulled in the lowest scores of the evening for his cha-cha with partner Tyne Stecklein. The irony of it? He was dancing to "Weird Science."
-High School Musical star Corbin Bleu and his pro partner Karina Smirnoff tied scores in the contemporary category with high school drama queen Elizabeth Berkeley, who danced with Val Chmerkovskiy.
-Valerie Harper, who some of us are old enough to remember as Rhoda on The Mary Tyler Moore Show, and her partner Tristan MacManus brought down the house with their foxtrot. Harper, who was diagnosed with brain cancer earlier this year, was in high-enough spirits to joke about her ailment: "Not the cancer, but my sore knee."
-Snooki was there, and now she wants to be called Nicole. Judge Tom Bergeron suggested on a compromise: "Snicole." And henceforth shall she be known. (USA Today)
TV Shows
Snowflake Mountain Proves Reality TV Can Be Size-Blind —...
As a plus-size person, I’m not used to seeing bodies like mine represented on television, let alone on reality shows watched by the masses. And as for bi
by Mollie Quirk
Unbothered
Here’s A Black Love Summer Playlist — Curated By The Hottes...
What makes a good soundtrack to a love story? That’s the question we asked authors Ashley M. Coleman (Good Morning, Love), Ebony LaDelle (Love Radio), an
by R29 Unbothered
Movies
22 Movies Every Woman Should See At Least Once
by Claire Hambrick
Advertisement
Somos Latinx
How Queer Latine Artists Are Disrupting Urbano’s Homophobia
To celebrate queerness in any real way is to understand that trendsetting and culture-making is always bottom-up, not the other way around. We’ve seen th
by Marjua Estevez
GG Good Game
So, You Want To Start Streaming Online — Here’s How To Stay Safe
All the tips you’ll need to protect yourself from harassment while gaming
by Katherine Singh
Unbothered
Jack Harlow Didn’t Belong At The BET Awards — But Brandy Did
At the 2022 BET Awards, singer-songwriter Brandy proved that she is one to keep her promises. Last month, via Twitter, she promised to “murk this dude in
by Wisdom Iheanyichukwu
Unbothered
Lil Nas X’s Beef With BET Runs Deeper Than A Snub
Since he first burst onto the music scene, Lil Nas X has been known to make a statement; from his viral debut “Old Town Road” to its scandalous followu
by Ineye Komonibo
Entertainment
The Villain Of My Best Friend’s Wedding Isn’...
Some will say the biggest question in the ether of the cinematic comedy-drama is if unsupportive boyfriend Nate (Adrian Grenier) or unforgiving Miranda Pri
by Emily Maskell
Unbothered
Legendary Star Leiomy Maldonado Takes Us Inside The Worl...
Imagine a place where you can be anything you want to be and fully embrace who you are — without judgment. For Black folxs and members of the LGBTQ+ comm
by Kourtney Pope
Unbothered
The Womack Sisters May Come From Black Music Royalty, But They...
Every June, the world comes together to honor the endless contributions that Black musicians past, present, and future make to the culture. However, for th
by Ineye Komonibo
Somos Latinx
Gordita Chronicles is The Chubby Brown Girl Coming-of-Ag...
“Gordita Chronicles” feels like a deep-cut throwback to my childhood as an awkward chubby Brown girl growing up in a Latine immigrant family during the
by Virgie Tovar
Unbothered
House Music Has BEEN Black — Beyoncé Is Just Bringing It Back
One thing about Beyoncé, she’s always going to start a conversation. This time, at the center of the discourse surrounding Queen Bey is “Break My Soul
by Niki McGloster
Advertisement
Advertisement
Discover
R29 Stories & News
Watch
R29 Original Series & Films
Shop
R29's Most Wanted