Skip navigation!
Story from Wellness
A recent study out of the Oregon Health & Science University may have huge implications for the health world. In a small study of monkeys, it appears that a vaccine was partially successful in protecting the primates from contracting simian immunodeficiency virus, a close cousin to HIV. Of the 18 monkeys that received the vaccine, nine of them were resistant to SIV when infected. So, while this vaccine isn't perfect, it's a HUGE step that half of the monkeys survived. The vaccine created specialized T-cells that essentially hunted down the viruses in the monkeys' tissues and eliminated them, functioning as both a protection and a cure. After a couple years Dr. Louis J. Picker, the author of this study, couldn't tell the monkeys who had had the vaccine and SIV apart from healthy monkeys who were never been infected. They were completely healed. Although it will take up to three years to develop a vaccine for human trials, researchers are optimistic that this vaccine could both be used as a multi-faceted defense against contracting HIV and also as a treatment for those already infected and on antiretroviral drugs. And, though treatments that work for monkeys don't always translate to humans, this is still an exciting and important step forward, for AIDS research. (The New York Times) 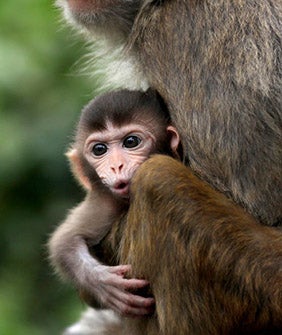 Image: Via The New York Times
Dedicated Feature
How Do You Know When It’s Finally Time To End A Relationship? We ...
There are countless ways to mourn a breakup: You might consider bangs, weep uncontrollably, move across the country, acquire your driver’s license then w
by Eliza Dumais
Most Wanted
I Tried A Night Guard To Help My TMJ — Here’s How It Went
I’ll let you in on a little secret: There’s one thing I bring with me to bed every night, and it’s brought me immense pleasure. No, it
by Karina Hoshikawa
Spirit Guide
The 5 Most Wanted Spiritual Products, According To R29 Readers
Welcome to Spirit Guide! Your guide to all your spiritual, tarot, astrology, and occult-related shopping needs — from launch announcements and exclusive
by Mercedes Viera
Advertisement
Unbothered
The Abortion Rights Fight Is On, & Black Women Are Still On The F...
On Friday June 24, 2022, Roe v. Wade was overturned, restricting abortion access across the country. That’s the painful reality. I’m not here to fearmo
by Brea Baker
Horoscope
Your July Horoscope Is Here — It’s Time To Embrace Your Power
by Lisa Stardust
Horoscope
Neptune Retrograde Is Here To Give Us A Cosmic Reality Check
It’s time for another annual cosmic ritual to take place in our skies: Neptune retrograde. Starting on June 28 and lasting until December 3, the Plan
by Elizabeth Gulino
Horoscope
Your Horoscope This Week: June 26th to July 2nd, 2022
by Gala Mukomolova
Abortion Access For All
How You’re Feeling Is Okay — How To Cope & Take Action After ...
In the wake of the reversal of Roe v. Wade, if you believe in abortion, reproductive health, or myriad other human rights, you may be feeling, well, a lot.
by Molly Longman
Fitness
Everything You Need For A Home Gym, According To Fitness Instructors
by Karina Hoshikawa
Abortion Access For All
‘I Needed Those Years To Grow.’ 5 People On How Abort...
Democrat-blue balloons and bawling women — that’s what El Sanchez thought of immediately when they first learned of the Supreme Court draft opinion th
by Molly Longman
Abortion
How Abortion Decisions Could Impact IVF, According To A Fertility...
Welcome to Refinery29’s Fertility Diaries, where people chronicle their joyous, painful, and sometimes complicated paths to parenthood. Today, we hear fr
by Courtney Shea
Best Deodorant
Megababe’s Geo Deo Keeps My Body Odor At Bay
I’ve largely associated Megababe with its best-selling anti-chafing Thigh Rescue. After trying it last year, it quickly beat out just about any other
by Chichi Offor
Advertisement
Advertisement
Discover
R29 Stories & News
Watch
R29 Original Series & Films
Shop
R29's Most Wanted