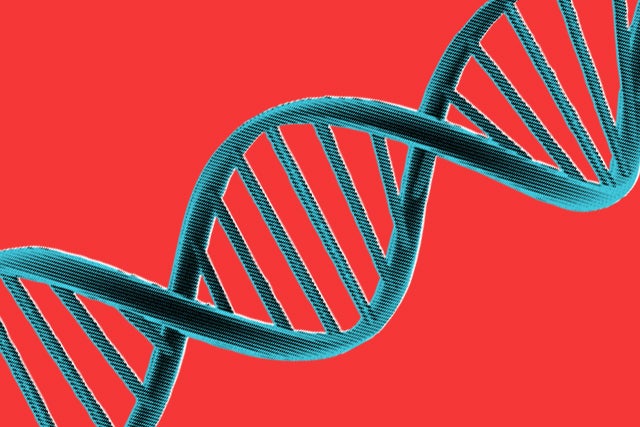 We all know that our genetics play a HUGE role in predisposing us to all sorts of things, good and bad. And, even though DNA is only one piece of the puzzle — there's so much we can do to take control of our health on a daily basis — it's important to acknowledge the part it plays in how we feel.
Enter, one of the more hot-button parts of this conversation: the so-called "obesity gene," also known as the FTO gene. If you have it, that doesn't mean you'll necessarily have trouble with your weight, but it does help to indicate the risk of obesity. Not at all uncommon — approximately 37% of Caucasians have at least one copy of the high-risk version of the FTO gene, and about 16% of folks carry two copies of the high-risk genes, increasing their lifetime risk of obesity to about 20% above individuals who don't carry this gene at all.
Advertisement
Now, what is it about this particular gene that increases your prospects of weight gain? No one is exactly sure, but the most recent science says that it impacts us hormonally (particularly affecting the hormone ghrelin, which tells our brains when to be hungry).
In people with the high-risk version of this gene, their hunger hormone levels don't drop as steeply after eating a meal, leaving them feeling hungry, even though they've just eaten. It's easy to see how this could make weight maintenance a difficult task.
Although there's no way to test yourself for this gene yet, researchers have the ability to test for it. And, in a recent study, they did just that. They wondered if after being told they tested positive for it, people would feel more out of control and less likely to pursue weight loss. Turns out, no. If fact, the exact opposite was true. Knowledge of the gene didn't discourage people in the study — it helped them understand their bodies better and made them feel more empowered. Even though possessing the gene meant that a weight-loss journey might be more difficult for them than for others, those with the gene said knowing about itmade them feel less stressed out.
Any health journey has multiple layers, all of which are important. Perhaps genetic information is just one more factor — one that might be especially helpful in the health care of the future. But the question remains: Would you want to know if you tested positive for the obesity gene? How would it change the way you treat your body, and your approach to healthy living? (U.S. News & World Report)
Beauty
Expensive Hair Treatments Didn’t Fix My Hair Loss
I have a habit of crying in the shower. The flat I live in lacks internal walls so it is just one long room with separate areas demarcated by rugs and chan
by Hannah Turner
Deals
Get A Prime-Exclusive 20% Off This R29-Approved Sauna Blanket
Super Sale Alert: Get 20% off everything from HigherDOSE on Amazon with a Prime-exclusive coupon, now through tomorrow, October 12, 11:59 p.m. EST. The
by Mercedes Viera
Amazon
Put Your Aching Muscles Out Of Their Misery With These Prime Earl...
I don’t know about you, but I’ve spent the last two years developing some serious aches and pains (she writes, hunched over her laptop on the c
by Charlotte Lewis
Advertisement
Unbothered
I’m A Black Woman Living With Body Dysmorphia — & It’...
Trigger warning: this piece references eating disorders, suicidal ideation, and sensitive content regarding body dysmorphic disorder (BDD). I was 20 years
by Nia Shumake
Wellness
Ritual’s Bestselling Synbiotic+ Is A Superpill For Gut Health
Over the past few years, I’ve noticed my gut health has been in less than stellar shape. No matter what I eat, I’m consistently gassy and bloat
by Jinnie Lee
Most Wanted
True Story: I’m 35 & Finally (Maybe) Trading Single-Use Pad...
It’s true: I’m a few weeks shy of my 35th birthday and still use single-use menstrual pads. I don’t know if it was the trauma of that fir
by Charlotte Lewis
Hot Girl Somos
Poletic Justice Instructor Mona Marie Is De-Gentrifying Pole Dance
Welcome to Don’t Yuck My Yummm, Unbothered’s sexual wellness column and digital diary aimed at destigmatizing Black womxn’s intimate experi
by Kourtney Pope
Menstruation
I Ditched The Menstrual Cup For The Disc & I’m Never Going ...
Deal alert: Hello Period., a brand mentioned in this story, is offering 15% off your first menstrual disc purchase with the code HELLODISC at checkout. Whe
by Jinnie Lee
Most Wanted
Alleviate Your Period Pain With These Surprisingly Sexy Solutions
If you’re like me (or the large percent of people who suffer from menstrual pain), the week your period arrives is pretty damn miserable. Every wakin
by Charlotte Lewis
Hot Girl Somos
Si Hay Sol, Hay Panza: How I’m Reclaiming Summer as a Fat Brown Babe
When I was about 8 years old, my grandparents enrolled me in swimming lessons. I went to the community pool, excited and suited up in a one-piece bathing s
by Virgie Tovar
Unbothered
Black Women Have BEEN On The Frontlines Of The Abortion Rights Fi...
On Friday June 24, 2022, Roe v. Wade was overturned, restricting abortion access across the country. That’s the painful reality. I’m not here to fearmo
by Brea Baker
Body
Swimming On Your Period: The Complete Guide
While tampon ads showing women wearing white frolicking in a field can be a little silly, they do have one thing right: You don’t have to change any of y
by Erika W. Smith
Advertisement
Advertisement
Discover
R29 Stories & News
Watch
R29 Original Series & Films
Shop
R29's Most Wanted