Skip navigation!
Story from Politics
As the crisis in Syria escalates even further, tensions over the world's reaction to the chemical attacks are coming to a boil. After much debate, the U.S. Senate Foreign Relations Committee voted to grant President Obama the authority to launch a military intervention in Syria. The decision came after Obama gave an impassioned speech urging the senate to approve the measure. "If the international community fails to maintain certain norms, standards, laws, governing how countries interact and how people are treated...over time this world becomes less safe," Obama told reporters from Sweden. "It becomes more dangerous not only for those people who are subjected to these horrible crimes, but to all of humanity."
Advertisement
The idea of an American military attack on yet another country sounds overwhelming at first, but it is important to note that the Foreign Relations Committee afforded the President limited authority. Whatever measures the U.S. decides to undertake, the goal (as of now) will be to degrade Assad's capabilities and deter him from launching a similar chemical attack on the Syrian people — not to launch an all-out ouster of Assad. According to White House Press Secretary Jay Carney, the intervention will seek to protect the interests of Syrian citizens and our national security.
While we completely understand the brevity of the chemical attacks and the need for protection for the victims, we have to admit that we're conflicted about this latest development. For most Americans, the idea of launching another military attack is unsettling — but, in this situation, there is almost no right answer. Tell us below what part, if any, you think the U.S. should play. (Washington Post) 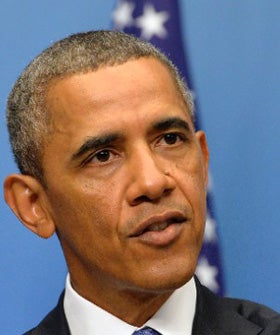 Somos Latinx
What Latinxs Are Manifesting for 2022
With the end of yet another strange year comes the opportunity for new intentions, reinventing ourselves, and reimagining our realities. 2020 shook us to t
by Jacqueline Delgad...
Somos Latinx
Why Puerto Rican Christmas Carols Are a Symbol of Patriotism
For all the political limbo Puerto Ricans have endured in the last 500 years, one thing is clear: come Christmas, we’ll cook lechón asado, improvise pat
by Frances Solá-Sant...
Somos Latinx
The Mirabal Sisters Fought Bravely Against State Violence—These D...
The names Patria, Minerva, and María Teresa Mirabal are synonymous with resistance. Across the Dominican Republic and Latin America, people young and old
by Jasely Molina
Advertisement
Somos Libres
How Republicans & Democrats Weaponize Latinx Trauma to Get Votes
Daniela Ferrera had stopped at a red light on October 11, 2020, in the Miami neighborhood of Westchester, where a pro-Joe Biden caravan was making its way
by Raquel Reichard
Somos Libres
Haiti Aided Latin American Independence Movements; Latinxs Are Re...
In 1815, Spain’s defeat of Simón Bolívar’s revolutionary army in Venezuela nearly extinguished the dream of independence in South America. After the
by France Francois
Somos Libres
My Father Was Forced to Flee His Country; That’s Exactly Why I Pr...
Like many first-generation Latinx people living in the United States, I grew up hearing stories of liberation movements, government brutality, extreme poli
by Lola Méndez
Somos Libres
Loverbar Was A Safe Space For Queer Puerto Ricans; That’s Exactly...
"It would be irresponsible of me to call it a safe space. But I will try my fucking damnest every single day to make it as safe as possible.”
by Mercedes Viera
Somos Libres
The Word “Latinx” IS A Betrayal To Latinidad. That’s Exactly The ...
Latinx is a betrayal. It’s an attack. It’s a butchering of Spanish. And that's why I use it.
by J. A. O.
Work & Money
The Pandemic Exposed The Lie Of Women’s Equality. Where Do ...
As many women face increasing pressures from work and home, activists and experts urge federal action
by Jana Cholakovska
Coronavirus
The FDA Has Officially Approved Pfizer’s COVID Vaccine. Wil...
Update: On Monday, August 23, the FDA approved the Pfizer/BioNTech COVID-19 vaccine, making it the first officially licensed vaccine against the coronaviru
by Danielle Campoamor
Unbothered
Civil Rights Legend Lucille Times Dies At 100, Leaving A Lasting ...
Lucille Times, a  Montgomery civil rights activist who got into a fist fight with the same bus driver Rosa Parks stood up to, passed away late Monday even
by Tayo Bero
News
Apparently, Giving Money To People Reduces Poverty & Hunger. Who ...
As it turns out, there’s an easy, straightforward way to reduce the endemic poverty and hunger in America: money. According to new data from the U.S.
by Lydia Wang
Advertisement
Advertisement
Discover
R29 Stories & News
Watch
R29 Original Series & Films
Shop
R29's Most Wanted