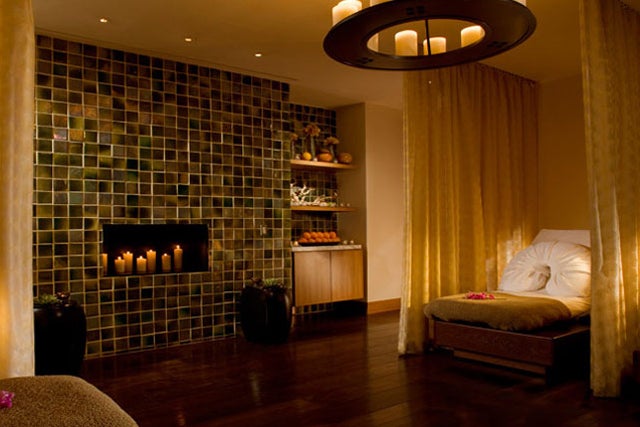 Photo: Courtesy of the Peninsula Spa.
We heart Chicago, but there are a few things about urban life that top our list of annoyances: dirty windowsills, grimy feet that result from walking around the city in our favorite summer sandals, and weather-inducing skin irritation. But, before you abandon the Windy City for the sake of your complexion, listen up.

Beauty authority
Daily Glow just released a report on the best and worst zip codes for your skin based on an analysis of the 55 largest cities in the United States. The results were determined by comparing cancer rates, climate statistics, and dermatologists per capita. And guess what? Chicago came in at number five, only being topped by Portland (number one), San Francisco, Seattle, and Baltimore. So, just what is it that's responsible for our complexion perfection? As you probably already guessed, it's not the air. Rather, we have the highest number of skin-care pros available — who knew? And in case you're curious about who came in last, you may want to reconsider moving to Phoenix or Las Vegas if you want to keep up with appearances.

If this is motivating you to get a facial (it should), then we suggest you try out the rad new booking service Pretty Quick from Chicagoan Coco Meers. Just type in what you're looking for, when you want to go, and what 'hoods you're willing to travel to and you'll get a list of tried-and-trusted pros to choose from. So, what are you waiting for? We've got to keep our number five alive!
Living
This Couple Got Married While Running A Marathon — No, REALLY
What an amazing day!!! #marathonwedding @ChiMarathon pic.twitter.com/rHQ7HxkOfT — Stephanie Reinhart (@kitchy7) October 12, 2015 Like many couples, S
by Ally Hickson
Chicago
J-Lawr & Amy Schumer Boogie Atop A Piano During Billy Joel’...
First Taylor Swift, now Billy Joel. Apparently 2015 is the year that really famous pop stars bring other really famous celebrities onstage with them to per
by Elizabeth Kiefer
Chicago
The Lazy Girl’s Guide To Amazing Skin: Summer Edition
by Melanie Rud Chadwick
Advertisement
Chicago
7 Cool Shops To Visit In Chicago This Weekend
by Christina Perez
Chicago
Found! The Perfect Last-Minute Summer Getaway
by Rebecca Taras
Chicago
7 Chicago Food Experts Reveal Their Fave Summer Eats (& More!)
There’s so much to love about Chicago summers, and tops among them is the food: The bounty of fresh fruits and veggies at farmers’ markets, the
by Judy Sutton Taylor
Chicago
20+ Pics Of Pitchfork’s Most Inspiring Street Style Stars
by Erin Donnelly
Chicago
How To Do Chicago Like A Lollapalooza All-Star
by Leah Pickett
Chicago
11 Chicago Dream Apartments To Rent Right Now
by Stephanie Sims
Chicago
18 Delicious Chicago Dishes For Your Foodie Bucket List
by Caroline Stanley
Chicago
Chicago’s Best Al Fresco Happy-Hour Spots
by Amelia Levin
Chicago
How Two Sisters Are Changing The Way We Namaste
We tend to think the best decisions in life are made over pizza. Case in point: One frigid January night last year at Pequod’s, sisters Natalie and A
by Jourdan Fairchild
Advertisement
Advertisement
Discover
R29 Stories & News
Watch
R29 Original Series & Films
Shop
R29's Most Wanted